I haven’t reached the second half of the game yet but I did do four “playthroughs” so I felt like I should write something here. I’m trying to clear Vivi’s request on the 5th (current) round but if I fuck up I’m not sure if I want to play another round to try and unlock the real deal events.

Yuusha Shisu is a game that begins with the Hero and his party in front of the last door before the Maou fight. The Hero’s lover is held hostage so he ends up in a 1 vs 1 fight against the Maou, concluding in mutual defeat. The final boss is dead and the world is peaceful again, at the cost of the Hero’s life. But the heavens are generous and the angel Yuria revives the Hero for 5 extra days before he has to die for real. The Hero, revived on Monday at max stats, has complete freedom over where to go and what do do, but his stats decrease and he forgets his skills as time passes, until he drops dead on Saturday. The Hero decides to go find his lover in these 5 days, which is easier said than done because nobody, including him, remembers her! So instead, he wanders around doing quests for various girls in the kingdom and try to revisit areas he previously went to in his heroic journey trying to make the most of the 5 days and find clues about his missing lover.

It’s basically like playing the epilogue of an RPG, except all’s not over. Not only does the world go on even with the Hero and Maou dead, but the game even begins with the king lamenting that the while everybody banded together while the world was in danger, people are going back to their selfish, greedy ways as the kingdom is peaceful once again. Also since the Hero begins at max stats with a spell that lets him instantly teleport to any of the three major towns, I teleported to the one near the “final dungeon” (Maou’s castle) and walked into said dungeon (killing everything in a single hit while getting consecutive turns because my stats are that high), only to find the Maou greeting me from his throne. Well that’s one way to make my sacrifice feel worthy…

Anyways, there are three “bosses” in the first half of the game and you can easily defeat them with the Hero + his default party member (old man wizard) thanks to having post-game stats. As time passes, the Hero’s stats decrease, but you can get more party members (cute girls) by completing their requests. Unlike the Hero, they actually level up from battling like in a normal RPG so you’ll reach the point where the party members are much stronger while the Hero hits enemies for 0 damage.

The main point of the game is to do the heroines’ requests and make good use of your 5 days. At the end of the week, the Hero dies and his funeral happens, with the characters’ dialogues changing depending on what you accomplished. Then you get a scrolling epilogue describing the kingdom’s fate after the Hero’s death. You can request another playthrough and redo the 5 days, essentially working as an NG+ that keeps track of event flags but your stats get reset back to max (and you start with 99999 gold). Each heroine has an initial request that lets them join the party upon clearing, and on the next playthrough, heroines whose requests you cleared previously will have different joining conditions and a further request. Clearing this results in an eroscene (but it’s an all-ages game so fade to pink) after you give them a specific present and sleep at the inn (takes up time), and there are some heroines who don’t join you but have events + an eroscene as well. The conditions for the second half of the game (the real deal plot, I presume) is to 攻略 all the heroines, but it seems like you just need to clear the request and not necessarily get the eroscene. Also for some reason, on my 5th playthrough the heroines’ requests got reset back to their initial ones so I actually have no clue what is going on. I cleared a bunch of heroines’ initial requests on my 2nd playthrough and the next two playthroughs triggered their second request events but it seems like it gets reset after certain (unknown) conditions. Good thing I only have one more heroine to 攻略 at this point, though she’s also the most troublesome one.

If you don’t want cute girls in your party you can also recruit your twisted “rival” who was in your final boss party in the prologue. He shows up in dungeons randomly and joins you after you beat him 3 times (he gets stronger each time while you obviously get weaker). He’s actually a great party member whose regular attack targets all enemies and can sweep 雑魚 better than anyone else, but I wanted a harem party so I only ever used him in one playthrough. The dialogue when he joins is pretty gay, too bad he’s not an edgy bishounen because then I could consider going the way of Hero x Rival instead.

As for the heroines, they vary in terms of usefulness, and generally the ones with more difficult requests are also more versatile in combat. There’s not a lot of text in the game, but there’s some pretty fun takes on the Hero vs. Maou dynamic that is basically a universally accepted narrative in JRPGs.

The setting has various 亜人種 that live in isolation in towns inside dungeons and are on bad terms with humans but lent the Hero a hand in dire times because he is Good. One of them, Ryuu, was an archer in the “final” party and saved the Hero when he got lost in the forest. She lives in a village in the forest, which isolated themselves using a barrier for hundreds of years, and she asks you for the Wind Orb to help recreate the barrier in her request. It’s pretty clear that aside from the Hero being on friendly terms with the forestpeople, they don’t feel the same way about the rest of humanity even after banding together to defeat the Maou, and are ready to isolate themselves for centuries again with your heroic help. 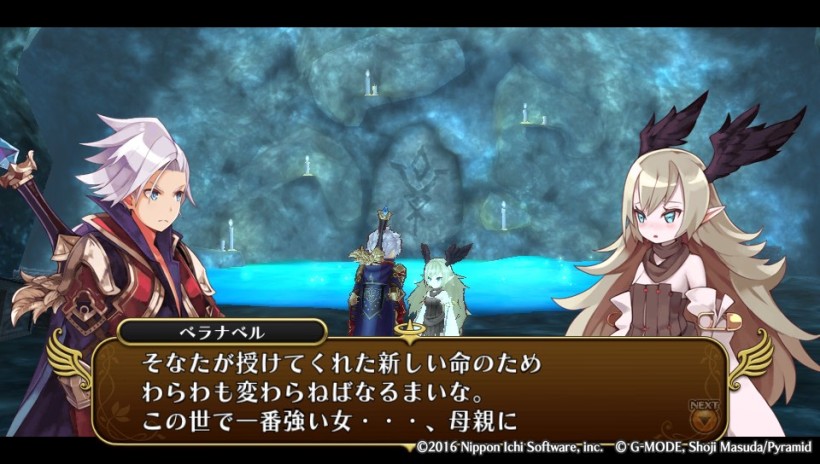 Other heroines include a sister trying to gather funds to rebuild the church (she asks for more money than you can hold at once 😉 ), a wandering merchant who randomly appears once a day in towns (very annoying to meet and raise flags with, since you have to run into her 3 times both for her initial and 2nd request plus more, but she is very cute and can even teleport to dungeons so all is forgiven), a mad scientist trying to revive a dead forest in a dying depressing town, and an 亜人種 who lives in a fiery cave town. There’s also the princess of the kingdom who’s in love with the Hero and offers him a free rare item (actually very helpful) but binds him into a marriage in exchange. Something tells me she’s kind of insane, and trying to marry a dying guy right before his funeral is not why.

On the second playthrough and beyond, you also get the Maou’s daughter (very cute) who is hiding with war orphans trying to put an end to the cycle of hate and war, and the next hero in line, Yona, who is practically driven insane due to having to bear the role of the next Hero. What’s interesting is that after marrying the princess, she stops locking you into a marriage next time but instead asks you to raise Yona until she learns the Hero’s signature skill in return for giving you a rare item. Generally in old RPGs, the princess is supposed to be the one waiting for the hero’s return at the end of his journey, and serves as his motivation. Except here the princess appears to be overbearing at times with the pushing of the role of the Hero onto the next generation, and Yona is clearly very 病んでる by the time you meet her. If you never talk to the princess, Yona will randomly show up in towns asking to join your party, and gets more insane with every rejection.

Yona is the opposite of the protagonist, in that she starts off extremely weak but levels up quickly and will eventually learn all of the skills the Hero had at the beginning of the week. Her request is fulfilled when she learns the Hero’s signature magic (by then he has long forgotten it), but she can keep leveling up until all her stats are 999. In one playthrough I benched her and never leveled her, and at the Hero’s funeral she confesses  in that she never wanted to be the Chosen Hero and has no idea what she’s supposed to do since her job is to replace your role, cursing you for dying and making her bear the burden of being a Hero. Then when the princess goes up and does her overbearing “now you can rest and leave everything to the next Hero” speech, Yona snaps and murders her. This was probably the most fun funeral since in the same playthrough I had the Hero go after the Maou’s daughter and right before this she goes up to his grave and tells him she’s pregnant with his child.

The epilogue for this playthrough was amazing:

Yona’s line when you give her the 真紅のバラ which is what you trigger eroscenes with (only for one heroine per playthrough, and I already went with someone else that round unfortunately…) is also very moe:

The game has some fun bits on the Hero/Maou dynamic and probably building up to something with the princess and the Maou who’s not actually dead and the Hero’s missing lover, but it’s actually quite tedious to play since you have limited time to do things and each playthrough is pretty much the same enemy/combat-wise. There are also too many random events like Vivi’s appearance (actually the cutest girl but she never shows up when I want her to) and conflicting event flags that make the game rather annoying to play even if a playthrough is roughly 2 hours long. Rather than an RPG it feels more like an ADV with an RPG battle system to fill the time since the true difficulty is not the battles or leveling, but managing event flags within a limited amount of time. You can only save in one saveslot so I can’t even savescum efficiently smh…

If it weren’t obvious, this is an extremely 人を選ぶ game. It’s the upgraded version of some 500 yen phone game sold for 5000 yen, but as of this writing it’s less than 1500 yen on Amazon so it might be worth a try even if it isn’t much more polished than a doujin game or phone app. There’s not that much content and you have to do many playthroughs and probably repeat several quests to actually get party members so I hesitate recommending this to a normal person. I like the scenario so far and would play a full RPG that expands on the rather disjoint scenes and keeps up the commentary on the Hero/Maou dynamic and harem setting. The heroines (even the ones that aren’t insane) are pretty cute.