Cleared my first playthrough on hard, although perhaps I should have gone for nightmare instead, since the game’s difficulty has become more friendly with allowing the use of more items. Anyway, this is the remake of Ys IV, and actually the first version of Ys IV that was actually made by Falcom. I haven’t played the previous ones before (supposedly they use the bump system so I might go back and give ’em a try).

The gameplay is pretty much the same as Ys Seven, with some additional stuff like weapon/armor reinforcing (can’t remember if it was in Seven or not) and Kiseki-style quest boards. Game is 20-30 hours depending on how often you fool around/get sidetracked, and uses Seven’s 3-member party system with 3 different attack types.

I find Celceta to be an improvement since the characters have better variety to their play styles, and each character feels different in control. Back in Seven, character of the same attack type pretty much felt the same, so the differences in Celceta are quite welcome. The reinforcing system was fun, you get to put various properties onto weapons and armors like status effects and HP regen. Favorite character to use was Karna, because damn, her range is useful and Napalm Shot is hella useful. Callilica was also very fun to use with her wide-ranged hammer attacks. 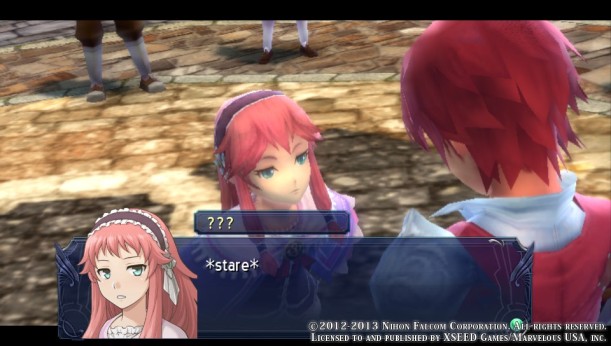 The main differences Celceta has against Ys Seven is that you are no longer restricted in the amount of items you can carry. In Seven, you had a limit of 5 of each item on Normal, 3 on Hard, and 1 on Nightmare. Here, you can hop into the final boss fight with 40 potions and 30 revival items and no one will bat an eye. It’s more fun to limit your usage of items for boss fights and actually learn to dodge/flash guard, but those potions were much needed for the damn Ruler of the Forest. That freaking laser-spewing deer deserves no mercy. Also you have NG+ and generally more side stuff to do, so Celceta is probably the “meatiest” Ys yet, at the expense of boss design. Ys Seven had the better bosses, as well as the games that use the Napishtim engine (well, minus Napishtim, except for a few memorable battles). 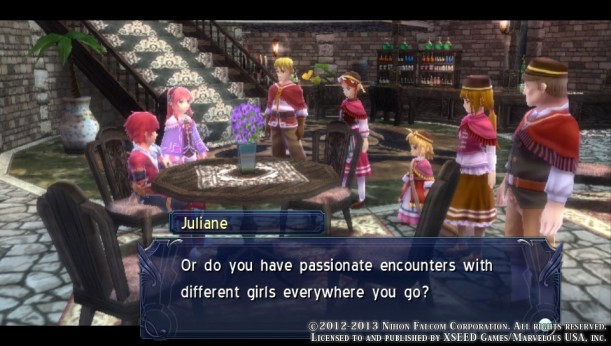 Story-wise, it was a pretty standard excuse to go on an adventure with a new cast, but also really neat for those who have played the other Ys games since it’s foreshadowing galore for Napishtim and also sheds some more light on the Eldeen race. On its own, it won’t be much, but it’s cool to see the various Ys games connect together in lore. As far as the standalone plot goes, it lacks grandeur.

Conclusion: Game was fun, fuck that map that’s standing at 99.8% complete after I beat the game. I probably forgot to hug the wall in some particular part of the Great Forest. My opinion on life hasn’t changed, I still want to be Adol Christin.

Asshole dialogue choices are the best

It’s here! SAL is slow as heck to my place, but whatever. I ordered from AmiAmi. This is the box before unwrapping.

END_OF_DOCUMENT_TOKEN_TO_BE_REPLACED 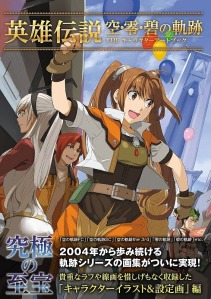 My wallet is not so fabulous and AmiAmi + everywhere with decent pricing sold out. I’d rather not pay $60 a book to Play-Asia, when I can buy Nayuta no Kiseki for $75. I’m still debating whether to attempt to buy the artbooks somewhere or just skipping ahead to Nayuta (combining Ys-style fast-paced action and Kiseki-style world detail and story is like a dream game). Dammit, I need to hurry up and become legal so I can use my bank account for Paypal and not have to go through so much trouble buying prepaid credit cards and such.

Also Ao no Kiseki Chinese PC version needs to hurry up and update the site. The official site hasn’t been updated when it comes to pre-orders or limited edition content. Only the “world” and “characters” sections are even available to click. With Ys Seven dated for June 20, I don’t imagine we’d be seeing the Ao no Kiseki Chinese version until next year though. Either way, they’re getting my money. The Ys Seven PC version looks pretty good from the screens I’ve seen so far, graphics-wise.

On a side note, people complaining about XSeed not putting Trails in the Sky SC in top priority for translation are seriously getting annoying.  I can tolerate it in the Trails in the Sky boards in small amounts because I can see how bad the wait for a small company to localize a gigantic game is, but when every piece of Falcom and XSeed news on Siliconera has people whining about SC…just no. XSeed’s localization was wonderfully done and opened me and a bunch of other people to a high quality RPG series, they do NOT deserve to be the victim of such whining and “I LOST ALL FAITH IN THEM BECAUSE GOD FORBID THEM TRY TO MAKE MONEY BY LOCALIZING OTHER GAMES” speeches. 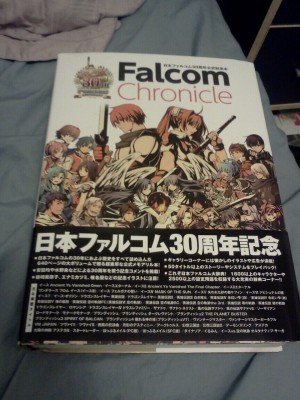 It’s here! My Falcom Chronicle! I haven’t look into it in-depth yet, but it’s divided into 6 sections: interviews/30th anniversary comments, illustrations, past Ads gallery, spoilers + screenshots for A LOT of their games, character database, and key term index. The illustration has art from throughout the years, including some really old ones =D

Ys I:
Jenocres – did I just get 2-shot by the FIRE? *off to grind until he becomes cakewalk*
Nyghtilger – lol did not even take damage
Vagullion – Y U NO APPEAR AND LET ME HIT YOU!? Oh, and goddamed bats.
Pictimos – Easy
Khonsclard – Slightly less easy
Yogleks & Omulgun – Dem stupid crystals…
Dark Fact – *rage in all caps* The danmaku here is DO NOT WANT

Ys II:
Velagunder – Why is ramming into him not working!? …wait, what’s this about a FIRE MAGIC I hear?
Tyalmath – Died a couple times until I get used to its attack pattern. Standard Ys difficulty for me.
Gelaldy – FUUUUUUU I keep accidentally running to the entrance and getting myself stuck in narrow hallway
Druegar – T’was alright…easy danmaku…
Zava – BEST. BOSS. IN. THE. ENTIRE. GAME. SUPER. FUN. DANMAKU.
Dalles – I GET TO RAM INTO BOSSES AGAIN!
Darm – equip Elixir, use shield magic, I GET LIKE 4 HP BARS. Dodging? Tactics? What are those?

The bosses were VERY varied in terms of difficulty in Ys I. Ys II was a lot better in terms of balance, and had the more fun boss designs. I guess I was the harder game overall, since it required more precision and you could used items in boss fights in Ys II (on Normal, at least). Ys II’s item usage didn’t make it TOO easy though, since you pretty much stick with the 3 herbs until the end. I wouldn’t want to replay Ys I, but Ys II is probably worth a replay on hard (And beat Darm without Elixir…). Also, I freaking love my fire magic. I like long range attacks.

Alright,  not gonna use the usual structure since I’m too lazy. Broken keyboard sucks, and typing on my dad’s old netbook isn’t a good alternative to my laptop in terms of comfort. I don’t really feel like writing a full separate review for a game that has a pretty similar engine to another one in the series. I’ll just be comparing this to the other Ys games I’ve played. Anyway, Ark of Napishtim is the sixth game in the Ys series, and is where the engine for Oath in Felghana originated from. I played the PSP version, which is the inferior version compared to the PS2 and PC versions, but I do love handheld gaming, especially for action RPGs.

END_OF_DOCUMENT_TOKEN_TO_BE_REPLACED

Hurry up and die. God I swear even Galbalan was less irritating because the floor tiles didn’t fall and there was more variety to him. Falling floor tiles are very rage inducing..

Dark himself also moves too damn fast. He makes Vagullion look like a pushover. I either a) get cornered due to disappearing floor tiles and sniped to death by the danmaku or b) can’t even hit Dark Fact enough and get killed by danmaku before I kill him.

I’ve tried the strategy of hitting him near the edge so I don’t get trapped, but then after I hit him a few times I can’t catch up with him and get killed by the danmaku. lol I swear it’ll take as long for me to beat him as the rest of the game. I can imagine how easy this game would get if rings and items worked in boss fights, though. Some long-range magic would also work wonders.

EDIT: So I figured that it’d take more time for me to try and beat Dark Fact than to replay the entire thing on easy, and I did exactly that. Dark was a complete pushover on easy, mainly because he died in less hits. Pride? Practice? Determination? I’ll save those for boss fights I actually find fun. On to Ys II!