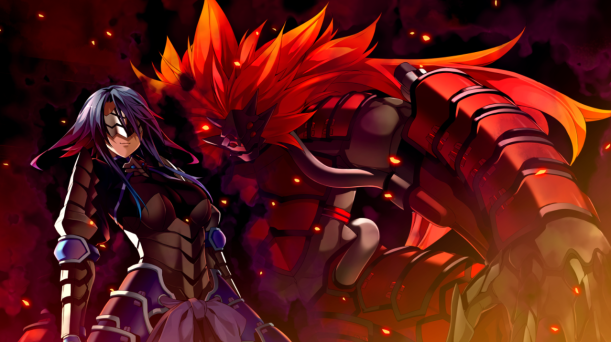 Ever since the success of Dies Irae, Light has become increasingly focused on making battle-oriented eroge with chuuni settings. Their recent works can be divided into two lines, with the Masada x G Yuusuke x Yonao team responsible for the 神座万象 and Senshinkan series, and a secondary team whose output consisted of Vermillion, Zero Infinity, Electro Arms. Silverio Vendetta is the latest addition to the latter, with a theme on the concept of victory.

END_OF_DOCUMENT_TOKEN_TO_BE_REPLACED 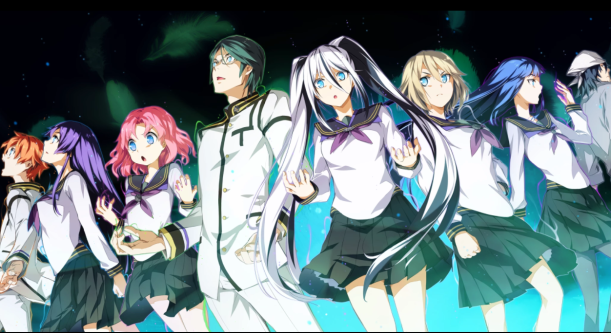 This is the sequel/fandisk to last year’s Soushuu Senshinkan Gakuen Hachimyoujin, and expands on the original work quite a bit.

END_OF_DOCUMENT_TOKEN_TO_BE_REPLACED

Paradise Lost is the first eroge written by Masada, and essentially serves as the first entry in the 神座万象 series. Lesser-known than its more recent, higher-budget siblings Dies Irae and Kajiri Kamui Kagura, Paradise Lost is more standalone than the former two and thus not many have bothered reading it. Although it’s technically the first game, its connection to Dies Irae isn’t really spelled out for you until late into Yakou’s path in Kajiri Kamui Kagura where the entire setting becomes more apparent. Regardless, it’s quite a good read despite being 10 years old and having an entirely different cast.

END_OF_DOCUMENT_TOKEN_TO_BE_REPLACED

Masada’s new work! This time it’s not a part of the 神座万象 series, but a new setting with more down to earth powerlevels (on average). Of course, toned down Masada just means normal chuu2 for everyone else. The story is centered around Hiiragi Yoshiya, a hard-working honor student who has been seeing lucid dreams all his life, and his friends who gain access to the lucid dreaming world through him.

END_OF_DOCUMENT_TOKEN_TO_BE_REPLACED

It was said that long ago, horrifying spider-like creatures known as the tsuchigumo roamed the land. Although they have been mostly wiped out by humans, there is one single piece of land that still belongs to the creatures of the olden times. The land we know as Japan is split in two by an ocean that runs down the middle, and on the eastern side of the island country is uncharted territory that is, to this day, still home to the tsuchigumo. Expeditions were made 300 years ago to acquire the eastern land and erase these creatures deemed as “outsiders,” yet none were successful. Worse yet, survivors of the expeditions seemed to have brought back “filth” and gave birth to “distorted” humans. No further expeditions were made, until recent political situations pressure for subjugation of the land.

END_OF_DOCUMENT_TOKEN_TO_BE_REPLACED

Despite a rather lackluster first impression due to a less-than-interesting first route, Dies Irae completely won me over by Marie’s route and then even some more in Rea’s. Chuuni world perspectives and plot development either make me cringe (like Chihaya’s route in Rewrite) or fire me up and get me to bend my suspension of disbelief, but Dies Irae is the game that made me dump said suspension of disbelief along with whatever dislikes of shounen manga cliches out the window, allowing me to fully immerse myself in the ridiculous powerlevels and fight scenes without thinking of the restrictions of pre-established real life logic and the points of views of ordinary, mature, functional members of modern society.

END_OF_DOCUMENT_TOKEN_TO_BE_REPLACED

I just finished Kasumi’s route, and I’m not impressed. Extremely underwhelming, and the fight scenes weren’t that impressive. I liked Shiro’s fights with Bey, but Ren’s fights were pretty anti-climatic. The “final boss” didn’t even appear, and it’s like they solved everything before getting to the climax, at the cost of a bunch of deaths of other characters. The scenes that were supposed to be emotional did nothing for me, and the ending wasn’t even satisfying. Even at the final showdown, I could only yawn. It feels like the game is literally telling you you could have done much, much better if you went with someone else. I’m really hoping this is the worst route.

Kasumi is my least favorite of the 4 girls, so I’m glad that I can still hope for a good route with the others. But yeah, talk about the childhood friend getting the short end of the stick. Kasumi wasn’t even the focus of her route most of the time. It feels like Kei and Shirou got more screentime than her. The romantic development wasn’t even good to make up for the anti-climatic “climax.” I guess Dies Irae is the type of game where the romantic moments happen in the H-scenes because the plot has no time for it. Isn’t it fun how childhood friends are either the true route, or the lame exposition/”starter”/unimpressive-should-be-done-first route?

Next up is Kei, and I hope her route is better because I actually like her. As of this moment, she is my favorite heroine. Long black hair + uniform + sword = hnnnnnnng. Oh yeah, the music is absolutely wonderful. Whenever I got to a fight scene, I just had to leave the game running in the background and browse the internet while listening to the amazingly grandiose battle BGM. The art is also really good, with a few odd exceptions that have strange anatomy. But the chuuni fight scene CGs are beautiful and the lighting and cel-shading are great.