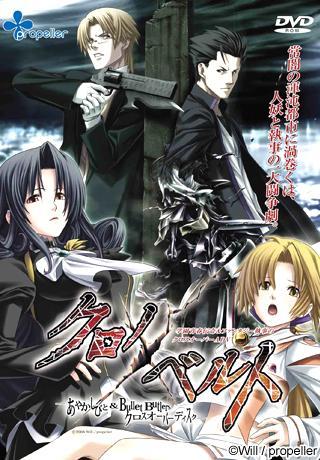 This is a crossover fandisk for Ayakashibito and Bullet Butlers. Clearly, this is the best kind of fandisk to do for the 燃焼系 games since the different abilities and fighting styles between the characters and the gap between the settings and cultures of the two games’ worlds make for fun interactions and battles. There’s also some ero and intimate moments for the heroines of each game and also some for the new characters (obviously cut out in the PSP version, but anyone with decent ero sensing abilities should be able to see exactly where they were). The funny thing is, the main heroines of their respective games don’t get any but all the other heroines (and a certain pseudo-heroine in Bullet Butlers) do. There are actual plot justifications for this.

Anyway, the fandisk is split into three parts. The first two are stories about the respective final bosses of Bullet Butlers and Ayakashibito, and it ties up some loose ends regarding their characters by throwing them into the other game’s world. You get to see the return of Kuki Youkou, AKA the most badass character in Ayakashibito, who punches his way through fantasy creatures and magic.

Once you clear the above two scenarios, the meat of the fandisk is unlocked. Chronobelt throws the main cast + some side characters of each game into a strange looping world that seems to be a mash-up of everything, and everything has a discomforting feeling to it, right down to the characters’ memories and roles. In addition, they are all armed with an inexplicable murderous intent towards the characters of the opposing game

Since the fandisk uses already established characters that everyone playing should be familiar with, the pacing is excellent. There are no dull scenes and the story is packed with action, plot, and the occasional ero. The amount of new characters introduced totals to four. Fans of Suzu and Selma might be disappointed because they don’t get much screentime despite being main heroines (especially the former, the latter has an awesome scene later on), but seeing the rest of the cast fight and team up is satisfying, as well as the return of the final bosses of each game (who no longer play a villainous role). It’s got plenty of awesome.

Chronobelt worked great as a crossover fandisk, and more of those should exist. There could have been more ichaicha with heroines, but this sort of fandisk with plot and battles is exactly the way to go for Propeller’s 燃焼系 eroge so overall it was very enjoyable.

Rewrite Harvest festa! is due for a 2012 release, it seems. I’m happy, because I still want more Rewrite. Hnnnnnng want moar Akane.

Anyways, if this contains content for all the heroines then it’s better than what Key did before, only making fandisk for the most popular heroine. More Rewrite is good. Now, how ’bout a nice PSP port or a fabulous PS3 port or even a Vita port of Rewrite…? *wink wink nudge nudge* No seriously, Vita is getting Little Busters! Converted Edition, even though the PS2 and the PSP got that. What else could they add besides touch panel control for baseball minigames? I might consider importing if it was on the PSP, although the CAD to Yen rate is really shitty right now.