Wow I slacked off for 3 months because I was playing games and hopping onto a new game immediately instead of writing anything. This is the way life is supposed to be; I was born to play games not write blog posts about them.

Refrain is a dungeon RPG by NIS, developed by the same team who did Majo to Hyakkihei (also known as The Witch and the Hundred Knight in English). I didn’t play the latter (but I sure plan to thanks to Refrain!) so I don’t really have any grounds for comparison.

The story follows the witch Doronia and her apprentice Luca as they arrive at the strange town of Refrain, where an unexplored underground maze lies. The maze has a miasma that no human can survive for long in, and thus no one has gone far enough to unveil its mysteries or come back alive to report to anyone. There is an exception though, for there exists the 妖路歴程 — a legendary “book” left by the “sole man to have survived an exploration of the maze.” The player takes the role of a soul that possesses the book and has to advance through the dungeons using Luca’s army of dolls.

The story is very interesting, especially since dungeon RPGs tend to present the player with a minimalist story or outright involve their party as the brave heroes. Refrain has actual protagonists and a supporting cast, all of whom are well-defined characters that are difficult to forget. The town has an eerie atmosphere where odd events are treated as a normal happening, and the townsmen all appear to be various degrees of shady. Doronia and Luca are shrouded in the most mystery themselves, as you (the 歴程) only watch their actions from a third-person perspective. It takes a while before the game tells you what Doronia is actually trying to do, and the actual setting is revealed only towards the end. The plot is not something you see in JRPGs or any mainstream games at all so it ends up being a refreshing experience, not to mention that it’s actually told in a compelling way.

Doronia, in particular, is a rather amoral protagonist who deceives people every day, performs gruesome puppet shows to small children, never hesitates to just use the Force to get her way with the villagers (like making them give her money), and bullies the little girl (Luca) every day. She gets a taste of karma quite often, to say the least. The game doesn’t shy away from unpleasant and even downright disturbing depictions of events; the scenes are quite surprising with how unrestrained they can be. There are parts that would literally be more appropriate in an eroge than a console-original video game, which is cool considering how video game stories these day prefer to lean towards the unoffensive side of things.

There’s a twisted fairytale sort of feel around the game, but Refrain is by no means a “dark” game though — the backstory behind Doronia is very sweet once you have the full picture, and the ending sequence is really moving with a great 演出 in the credits. I ended up really liking the story and atmosphere, and I’d say that Refrain is a strong contender for the console game with the best scenario for the first half of 2016 (although Odin Sphere is the only competitor out of games I actually played).

The gameplay started out great too, and is addicting from the get-go with its various unique mechanics. You create party members by infusing doll bodies with souls (both being consumable items). You can determine the class, growth rate (affects stat growth on level up), stance (standard/sun/moon which determines whether your character’s stats will lean on the offensive or defensive side), and the class-specific skill you start with. You’ll learn all of them anyways, but certain ones are more helpful to have at first. Your doll’s class only determines the stats and passive skills — active skills depend on the coven they belong to. Your party can have up to 5 covens, and each coven can have 1~3 dolls as active members and 0~5 support members. The covens are determined by scrolls, which will specify how many dolls it can hold and restrictions on them (i.e class/gender), as well as what Donum skills (battle skills) they can use.

In battle you give each coven a command, or you can choose to give each doll in the coven a separate command. Donum skills have to be used as a group and damage output depends on the average Donum ATK stat of all coven members, the coven’s HP and DP (required for Donum skills) are a sum of the members’, but items can only be used by individual characters. So, a coven of 3 characters is able to use 3 different items in the same turn, and more characters = more HP/DP, but for pure Donum damage output it may be wiser to just have one character with high stats rather than having someone else drag them down. Normal attacks are carried out separately by each character, but damage is also take per character instead of to the coven as a whole. 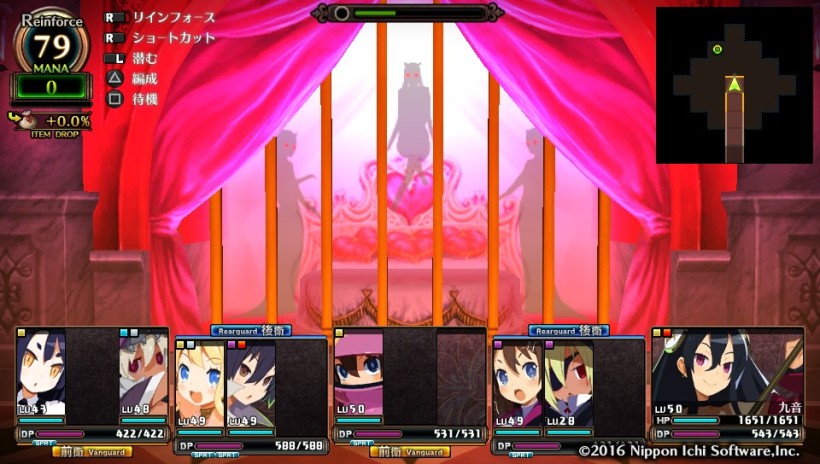 You, the 妖路歴程, have your own set of skills that can be used in exploration by consuming Mana. You start at 100 Mana, but the cost of the covens (each has a cost, yes) gets subtracted from that upon entering a dungeon. Leveling up a coven decreases its cost. You get all sorts of cool skills like the ability to break down walls (which is the only way you can reach some areas, and also a great method for people too lazy to walk), setting up one-time-use portals that can either take you home or let you enter the dungeon from the portal next time (you can set more than one), or make yourself invisible to enemies (they can still fight you if you move onto their path, but they won’t actively chase after you once they see you). There’s also a really neat mechanic that allows you to carry over EXP to the next fight, letting you receive a bonus multiplier on that EXP (up to 3x on the 16th carry over), but if you die or run away you gain nothing. It’s always tempting to do one more fight to make the most out of that multiplier, but I’ve gotten up to 100k+ carry over EXP stacked and gotten wiped out because I got a strong encounter or ran into an FOE out of pure stupidity.

The game has lots of mechanics that are cool in theory, but the novelty wears out after the initial 10 hours or so. Offensive skills are preset for each coven by its scroll (no skill-leveling or anything), which gives little satisfaction to my thirst for skill trees. The restrictive coven system actually makes the game limiting in terms of customization, despite all the other mechanics and character building options that suggest otherwise. There are 3 difficulty levels that you can switch between, but there’s no penalty to playing on Easy and Hard makes you gain Mana faster in dungeons, easily letting you get over the Mana threshold for the floor you’re on, which calls the Reaper. Status effects are useless because enemies recover after their current turn, which is a disappointment since I normally look forward to status effects being actually useful in DRPGs. The pacing and flow of the game is great and there’s always something to keep you entertained even if the system isn’t actually that deep and doesn’t hold up to something like Dungeon Travelers 2. My main complaint would be towards the last stretch, where the game throws two dungeons with no bosses at you, followed by some massive difficulty spikes in the name of bosses that deal ~2000 damage to all characters twice in one turn.

There’s a reincarnation mechanic that seems to be inspired by Disgaea’s in how it promotes frequent reincarnation into different classes (gain better base stats + can carry over up to 8 existing passive skills to new class, depending on level), but ends up being relevant rather late into the game. You can do some pretty fun things with it like giving Shinobushi’s dual-wielding to a class that wields hammers, or make a Pierfortress have the Astelknight’s skill that lets them survive death with 1 hp. It’s nowhere near as addicting as Disgaea, which is stat-grinding porn at this point, but it’s a cool idea that adds another layer to party building.

Oh yeah, and challenging the final boss at a normal state (i.e. the state you’re at when you first reach it) requires obtaining a certain coven scroll that needs a key that is a quest reward from a long chain of fetch quests. The game doesn’t tell you this.

While the story was interesting from beginning to end, the gameplay definitely overstays its welcome. There’s a dungeon that consists of three 9-floor towers and you have to climb through all three of them, and that’s where the climax of the game as an DRPG felt like it was supposed to be. If you list the dungeons sequentially it would probably be somewhere in the middle, but what comes after it feels like such walks in the parks in terms of dungeon design that I’d consider the three towers where the game peaked. I ended up spending 50-60 hours to clear the game, with a good chunk of it being time spent grinding for the last 3 bosses because they were such a difficulty increase following a massive lull in gameplay.

As for other aspects, the music and art are p. cool. The final dungeon track is great and the OST has a good hand in crafting the atmosphere of the game. The character designs are by Harada of Disgaea fame so they’re nice and colorful and brimming with character. Since this is a Vita DRPG most of the game is either 2D assets for event scenes and battles or some 3D mazes for the actual dungeon crawling part (which isn’t too shabby either). There’s nothing really to complain about, and since I’ve been playing mostly eroge lately, I’ve been longing for some CS-level polish and consistency in the visuals.

Refrain is not a bad game and has lots of interesting mechanics that I wouldn’t mind seeing incorporated again in the future. I liked the flow of the game and how it paced itself, and even though the system wasn’t that well executed in hindsight, it’s effective at throwing enough things at you to want to keep playing. It’s neat how it tried out different things even if not all of them work out, and is worth a play due to how refreshing it is. It’ll probably get eclipsed by all the high profile releases in the next few months, but for now it stands out as an ambitious effort. Also Luca is really cute, Luca bullying is truly the most entertaining. This is a good lolige.