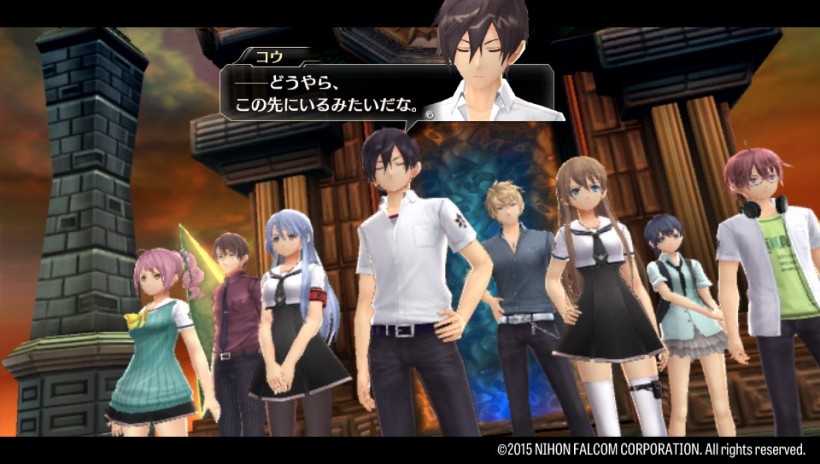 An action RPG by Falcom, creator of the Ys and Legend of Heroes series. Tokyo Xanadu is in some ways like the current-gen iteration of Nayuta no Kiseki, being a marriage of action combat and the story progression in recent Kiseki games. It’s also handled by newer members of Falcom and targeted at newcomers, and uses the same engine and graphical style as Sen no Kiseki/Trails of Cold Steel. Unlike Falcom’s usual fantasy games, Tokyo Xanadu is set in modern day Japan at a normal high school.

The story is about Tokisaka Kou, a normal high school student who takes on a variety of part-time jobs at night. One night he finds his classmate (a beautiful and popular transfer student) Hiiragi Asuka getting cornered by some delinquents and follows to help her, only to see them get swallowed up by a red “crack” in the air that leads to another world called Eclipse. He follows them into the crack, encounters Asuka fighting off some monsters, and gets his memories of that night erased by her. School life proceeds, until his childhood friend gets “kidnapped” by the crack and he jumps in again, this time awakening to his weapon that can deal damage to the monsters.

Asuka is actually an agent from an organization called Nemesis that is dedicated to researching the Eclipse and dealing with the instances where it interferes with this world, which usually takes the form of opening “cracks” that can kidnap people. Reluctantly, she lets Kou join her investigation and save people who get kidnapped by the other world. Each crack leads to a dungeon, which is infested by monsters called Greed and usually governed by a boss-class Elder Greed behind the kidnapping. 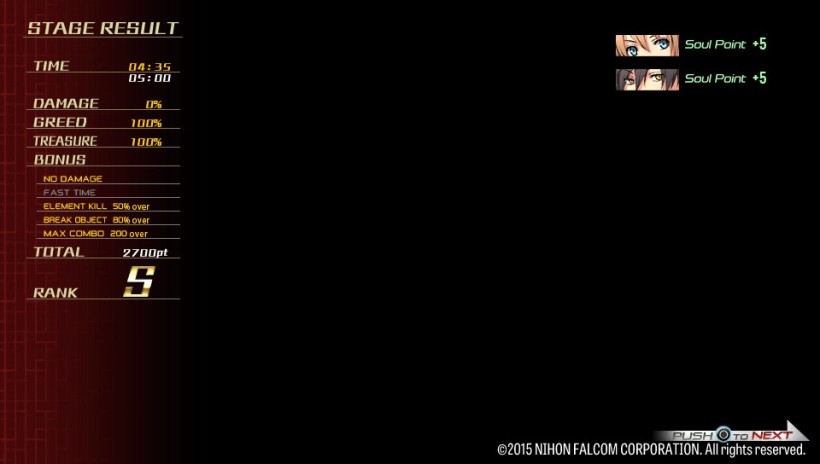 Each dungeon is designed as a stage, like in Nayuta no Kiseki, and you get ranked from C~S depending on your clearing time, damage taken, amount of inanimate objects broken, treasure chests opened, amount of Greed defeated, max combo, etc. At the end of some stages is a boss fight, which doesn’t factor into the player’s evaluation. The combat system allows the player character to jump/double jump, roll, and perform 3 types of skills in addition to the basic attack. Each playable character has a ranged skill, a heavy skill, and an aerial skill. In addition to attacks, they have various uses in the dungeon like breaking obstacles or reaching distant platforms with double jump + aerial skill (which brings you forward in midair). Instead of the slash/strike/pierce trinity in recent Ys games, Tokyo Xanadu uses a 5 element system where 4 of them have strengths and weaknesses in a circular relation, and the 5th element is weak to itself. Each character has a set element, but later on you can change them to their sub element via switching their Master Core and Kou gets to switch between all 5.

The characters play rather differently and they all have their uses so no one is outright bad, but there are definitely optimal choices if you want to cheese through some of the boss action. Outside of battle, you get a modified version of Sen no Kiseki’s Orbment system. Each character has a Soul Device which fits a Master Core that determines their attack element, passive skills that can be unlocked and strengthened with materials, and 4~6 slots where they can equip free elements similar to Kiseki’s orbments but limited to passive abilities only. There are the standard stat increases and status effects, but later on you can acquire elements that gradually restore the wearer’s HP or increase critical damage. The combat is fun and the controls are smooth; I really would not mind seeing another game with a similar system.

The combat system is fun at its core, but the same cannot be said for the stage design. The dungeons are pretty similar to Sen no Kiseki’s dungeons, which were acceptable for menu-driven RPGs, but ultimately feels like you’re walking through a straight corridor while fighting monsters on the way. There are so many hallways where you do nothing but walk straight and turn at the corner, and if there’s a fork in the road then one of them has a path block and the other has a switch to open up the block. Despite the combat system being pretty much made for platforming elements, the dungeons barely use any until late in the game. This is a step down from Nayuta no Kiseki, which had fantastic stage designs that made full use of the main character’s moveset as platforming mechanics. Controlling the camera can also get annoying during boss fights and rotating platforms (which is why I almost always prefer my action games top-down), but I guess that’s something I have to put up with in modern games.

The overall difficulty of the game is easy, even on Nightmare. I don’t claim to be any good at action games, but my experience with the game on Nightmare difficulty is what I would have expected from Normal. Heck, I’ve played Falcom games with Normal modes harder than Tokyo Xanadu’s Nightmare. The bosses can be pretty fun, but they’re nowhere near the level of Ys Seven or Felghana, the two games with some of the most memorable boss designs. While there’s a couple of fights that can get pretty frantic, even in late game there are some pretty predictable and generic boss movesets. I defeated the final boss on my first try. The damage you take is also not that much compared to how much HP you have, and there are many ways to make the game easy so you can still win despite not knowing what you’re doing. 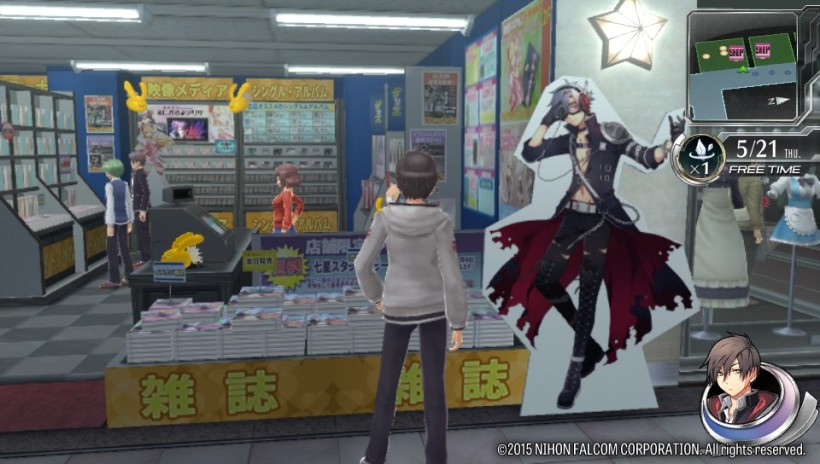 The overall game progresses like Sen no Kiseki so in each chapter you have this segment where you’re going around the school and town doing odd sidequests for people and advancing Kizuna events with you party members, and in the second half you progress with the story where you get new dungeons and bosses. Like in Sen, you have a list of NPCs with subplots that you can follow by talking to them regularly and doing sidequests. The prologue is easily an hour long before you get to fight anything, which isn’t anything new if this were a turn-based RPG but rather odd for an action RPG. The game ended up being over 40 hours (50 after true end), which is probably the longest action RPG from Falcom that I’ve played but a lot of it was reading/sidequests. As an action RPG it definitely lacks the focus of older games but there’s a lot to do if you like to do all the Kiseki stuff. There’s even the card game from Sen and a skateboarding minigame that plays exactly like snowboarding in Sen II.

You can tell that they want to tell the story the Kiseki way with lots of dialogue and a rich world. The team accomplished the “rich world” part with its detail NPC subplots and excellently designed environments. Everything in the town looks legit and to-scale, the hotsprings in the intermission were beautiful, and even the dungeons are beautiful in the camera pan the game uses to show off when you first step in. It’s no AAA game, but Falcom really outdid themselves with the environments in the Sen graphics engine despite being bad at 3D character animation. The framerate drops hard.

Too bad the story is where they failed to put in the work. Falcom is known for being 王道 to the extreme with their stories but being very good at the execution, which has resulted in some of the most likable RPG worlds and characters despite not doing anything innovative to the genre. The problem arises when you are taking the 王道 of a third-rate light novel plot and making the characters as dictated by the templates, which is what Tokyo Xanadu does. The dialogue is dull and it’s kind of saddening to see the writing go from Olivier’s lines in Sora no Kiseki to this generic copy-and-paste dialogue in the past decade. I have no idea what they are trying to do with Kou’s character other than write him out to be a generic LN protagonist, and everyone else basically fades into the blob that is the main party once their spotlight chapter is over. The game tries to split the focus across too many character arcs and ends up not developing any of them properly, while slowing down story progression to the usual Kiseki first chapter style of having all the cool stuff happen in the last chapter. The story is spread thin to focus on characters and world like in the start of a new Kiseki arc, but they failed to make the characters interesting and the world is just modern Japan with a mix of some strange elements that show the staff clearly could not get Kiseki out of their minds. The amount of text gets to the point where it’s not enough to be as fleshed out as a Kiseki, but too much to read through for an excuse plot in an action game. Some of the NPCs are more memorable than the main cast that essentially becomes yes-men to the protagonist during pre-dungeon dialogue, and even as a seishun gakuenmono Sen does a much better job.

Since Tokyo Xanadu was made by Falcom’s newer staff, perhaps the veterans are just using their time to refine Ys VIII and Sen III. Despite all the ways I can complain about this game, if you asked me if I had fun with the game then my answer is yes. A very 微妙 and reluctant yes but there were parts I enjoyed nonetheless. The core battle system is fun and the town is lively, and to be honest I was rarely actually bored while playing the game so that must count for something. I’d definitely like to see them take the basic system of Tokyo Xanadu further in another game with hopefully better everything else. It definitely has potential and the base material is not bad, but it’s hard to not expect more from Falcom.

Falcom is probably trying too hard to appeal to the newcomers/younger audience that their move to consoles brought in, sticking in a school setting and idols in the game like they want to hit everything on the checklist for media targeted at teenagers but not going far enough in that direction (the characters are hilariously 健全 and proper for modern day teenagers) so it ultimately feels like an old man trying to be hip with the young’uns. They even made their own idol unit. But hey, it seems to have worked out nicely with Tokyo Xanadu selling three times the expected numbers so maybe it’s just me. I don’t particularly mind high school settings or even “typical” light novel plots as long as it ends up being some combination of engrossing and convincing, none of which the game actually achieved.