Marvelous took the リア充爆発しろ (riajuu go explode) meme and made an actual game out of it. A game where you have arguments against Twitter celebrities, Ace Attorney style.

For those who do not know, a “riajuu” is a person living a fulfilling real life. It basically refers to those who 4chan call normalfags or normies. Net High takes place in a city where “living a happy, fulfilling life” is every citizen’s duty. Public services are made available according to one’s riajuu-ness. This begs the question, “what exactly defines a riajuu?”. The stereotype is that non-riajuu are loners with geeky hobbies and riajuu are people with girlfriends/boyfriends, a good job, and a wide circle of contacts. In reality the line between the two is extremely vague, and so the government introduced a social media platform called Tweetter where people can write posts of 140 characters or less and “follow” other people. Unlike social media platforms in our world, Tweetter is tied to one’s identity and citizenship. The government uses the amount of followers a person has to place them into a riajuu ranking that goes from G to A, and their privileges to services are proportional to their riajuu rank. A rank users can call a personal limousine, while G rank users are basically not allowed to shop in places fancier than convenience stores. Someone who reaches 0 followers is stripped of their citizenship and identity.

One day, a mysterious woman named MC shows up, introducing a new system called ENJ Battle where two people engage in a flame war to steal followers from the other. This presents an opportunity for a high-ranking riajuu to lose all of their followers in an instant, as well as the other way around. The protagonist receives a pair of next-gen glasses equipped with the Positive Active System, which temporarily increases one’s brain wave activity so that they are more positive and assertive — like a riajuu. With his glasses and a cute navigation AI partner, he challenges the leaders of each riajuu rank to rise to the top and avenge a kind girl who immediately lost all of her followers and was stripped of her identity in one night. 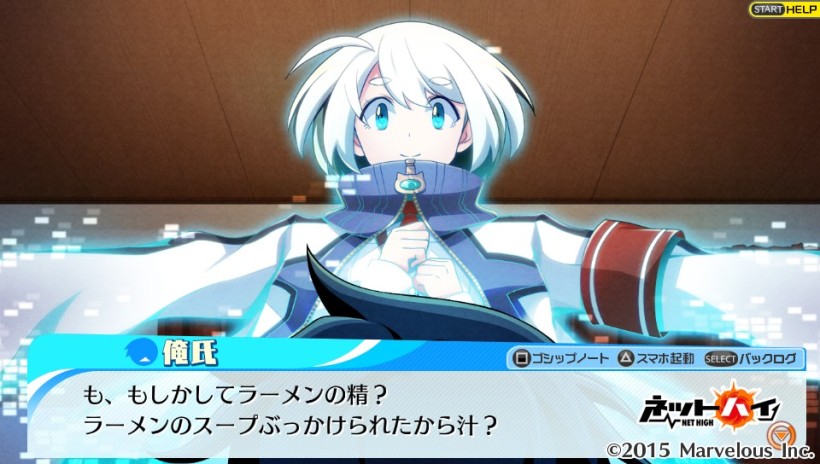 Net High is a wacky game full of (now outdated) internet memes in a bizarre world, but it is also a game exploring the effects of social media addiction in modern society. It is a criticism of the way social media drives people to put up a false front and give off the impression that they live much more extravagant and fulfilling lives than they actually do. The ENJ battles are fought by exposing the opponent’s lies about themselves by presenting evidence to point out contradictions in their “appeals” (think witness testimony in Ace Attorney), and the goal is to strip away their online character and expose their “real self” to the world, in hopes that they lose their followers. 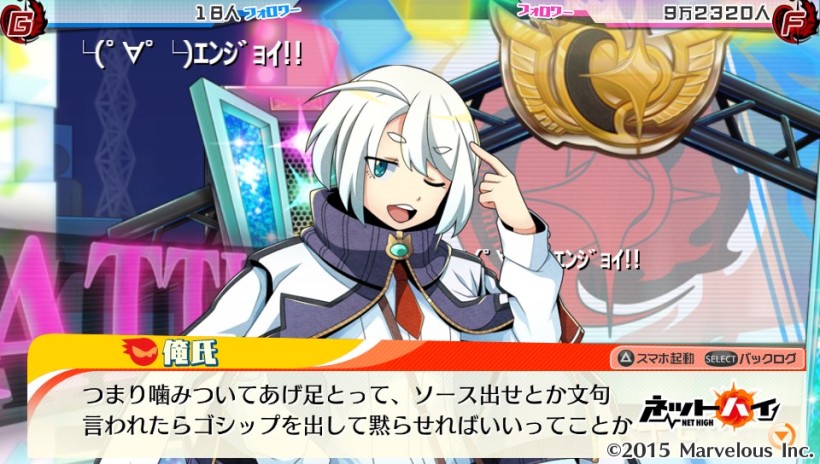 Each chapter consists of investigating about your opponent (where you gather evidence leading to their private lives) and facing against them in an ENJ battle. The gameplay flow is similar to the Ace Attorney games, except you’re dealing with internet celebrities and not murder cases. As the opponent loses their composure during the battle, their character portrait will explode to reveal their actual, lamer parts. For example, a guy’s fashionable-looking scarf will “explode” into a dirty towel, or his wine glass will explode into a gyuudon (chapter 1/trial early spoilers).

There are other minor features in the gameplay as well: your navigation AI has a bunch of cheat abilities like being able to hear the opponent’s true thoughts when their heart rate goes high enough (but you have to dig through the “noise” thoughts via a minigame first), and at times you have to make a speech about something off-topic — this is Twitter, after all. Yeah you may be trying to call out on the opponent’s lies, but you also have to make a speech on why dudes like magical girls as well. There are galge elements that work similarly to Danganronpa’s — you gain cheat skills to use in battle by befriending girls. Some of the cheat skills are really cheap, basically telling you which statement to press or where to present evidence. The final skill basically renders you invincible and lets you use all the other cheat skills without cost for the duration of the battle (you’ll get it long after you beat the game).

The game is not difficult at all; the battles are often easy and the opponents crack rather quickly. This has its advantages as the game manages to never drag, unlike some Ace Attorney games where you know who did it but they’re stubborn and keep coming up with more bullshit testimonies to drag the trial out. But still, the game is too easy and the gameplay doesn’t feel very satisfying. 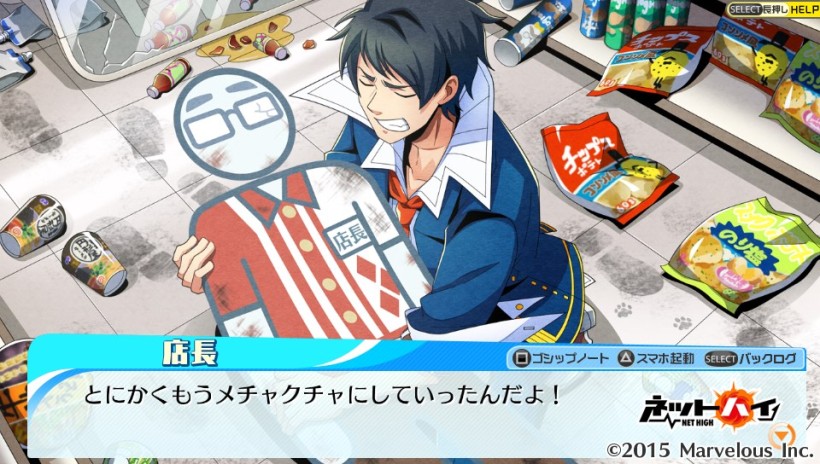 The best thing about the game is its ability to present a fun cast and an energetic story, while being a neat critique on social media that explores both sides of the argument. Seeing what kind of “loser” character is underneath each internet celebrity is very entertaining, but each chapter also ends in a heartwarming way. The world is absolutely ridiculous and the story can get corny at times, but I find the topics it explores to be very relevant to modern society’s relationship with social media. I think most people should be able to relate to some of its points. The game is aware of how ridiculous it is and can get extremely meta, but its over-the-top cartoonish presentation and constant jokes keeps it enjoyable even if you don’t care about any of that stuff. It’s a silly game built from an internet meme, after all. Also MC-chan’s lines are fun.

The visuals are striking and the game ends on a high note. I guess it being too short would be a valid complaint (15-20 hours to clear, there isn’t much to do afterwards other than the galge elements as a side), but I think it’s a good thing they didn’t drag it out any further. The pacing is good and I don’t recall ever being bored. It’s a shame that the game didn’t sell better, but I guess its concept was too niche. If you think you’d like it from the premise then you’ll probably like it, and if you enjoyed the trial then you’d most definitely enjoy the rest of the game. I found it to be a genuinely entertaining experience.