With a title that translates into ‘I thought it was harem heaven, but it was actually yandere hell,’ you can tell exactly what this game is going to be about. Also vague spoilers, because it’s almost impossible to talk about this game without touching its spoilers.

This is an ADV based on the concept of the yandere archetype found in otaku media — in particular, the type of yandere that turns teenage romance drama into a bloodbath. The first half of the game is a romantic comedy featuring Kisaragi Yuuya and his three childhood friends who are madly in love with him. Together they form a hobby circle at school that claims to be researching the town’s local history on paper, but circle activities consist of eating lunch and doing nothing productive in their club room. They receive pressure from the student council to disband their club since they’ve done absolutely nothing, and in order to save their club (or rather, club room where they can continue their harem antics), they must achieve #1 sales in the upcoming school festival. 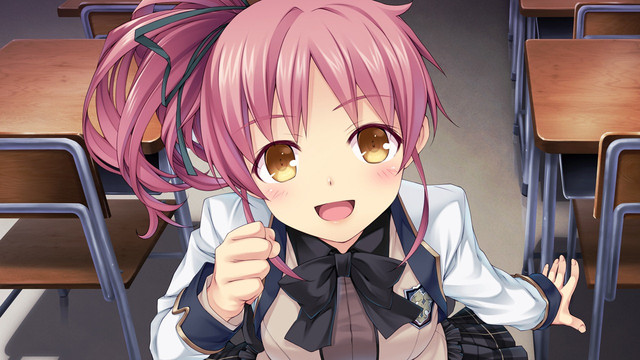 The premise parodies school life moege, except Yuuya’s three childhood friends are all at max affection towards him — creepily so. Compared to a real moege, the harem antics are awfully unnatural: the protagonist is entirely aware of the heroines’ feelings from the very beginning, but doesn’t act on it because he wants to keep the status quo, and the girls all act like they’re pretty much married to him. They cover pretty much all bases three heroines can cover in a typical school harem story, with the stalking tendencies amped up to max (e.g. one of them has the protagonist on GPS tracking).

What leads to the beginning of the yandere hell is the murder of a woman who tried to get close to Yuuya, committed using the circle’s mascot costume that was they key to their victory in the school festival. The three childhood friends begin acting odd, reacting happily to the victim’s death, and the police suspecting Yuuya’s circle doesn’t help. We then get this whole sequence of scenes where Yuuya is extremely shocked at his childhood friends’ insensitivity to the murder, desperately trying to convince himself that none of them could do such a thing. Of course, he continues to act in dense protagonist ways that trigger the yan side of a yandere. The second half of the game entirely becomes a psycho thriller, completely shedding off the pseudo-moege skin it once had.

This point is where the work emphasizes the emotional distance between the player and the protagonist. The protagonist behaves as if everything is a genuine shock, while the player knows from day one that all the girls are messed up in the head and things will get bloody. It warns you in the title and on the back of the box, after all! However, the expectation of yandere development is what ultimately throws the player off, as the “yandere hell” portion of the game tries to tell an actual story involving the history of the town and its local deity, and the murders aren’t as straightforward as the text implies. Some of the revelations near the end were completely unexpected and threw me off guard.

As one may expect, a yandere game brings upon loads of gruesome bad ends. These bad ends are where you see the heroines go batshit insane right in front of your eyes, committing murder in cliche yandere ways. Of course, this is what most people buying this game want to see, I assume.

The recommended play order is Sayuri -> Kanna -> Haruka, not only because more of the backstory and underlying truth gets revealed this way, but also because the “good” endings become increasingly unsettling. Sayuri’s route actually tries to redeem the heroine and justify her actions with mental illness and ends with a realistic punishment for her sins while providing a bright forecast for the future. It’s also the one that plays out the most similarly to a yandere route in a normal game. The other two actually become less like galge and completely embrace the thriller side of things, and even paints the other two girls in a better light than the route’s heroine. Kanna’s route has the heroine missing for the vast majority of the route, for example. Haruka’s route is the true route with the full story, and actually ends on a rather positive note, until the epilogue that throws out a final reveal. It ends with a terrible aftertaste, with the protagonist being stuck in a situation that is undeniably a harem, but most definitely a hell. The epilogue throws the game’s final meta aspect to the player, likely leaving them with the thought of what the fuck did I just read? 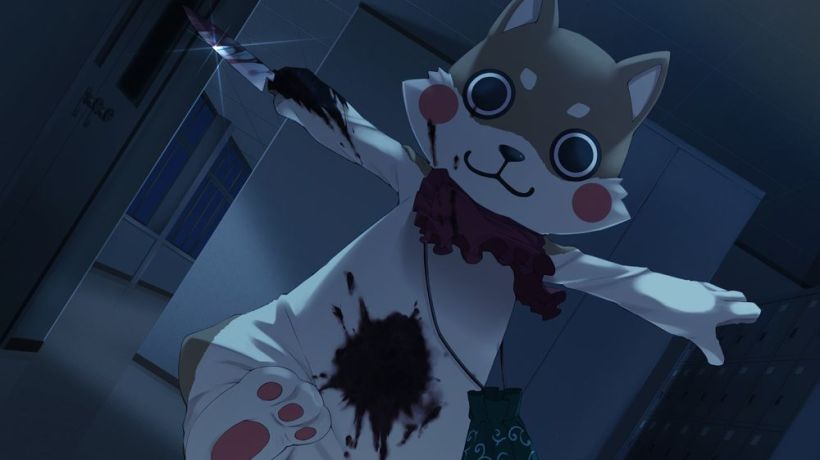 Yandere Hell is a work that doesn’t stop playing with the (presumably genre savvy) player’s expectations, and while there is plenty of stuff that is probably entertaining for shock value, it does little outside of that. The characters are unlikable (probably intentional), and the first half of the story with the club and school festival is incredibly dull. The harem part is the entire common route, which lasts for 7-8 hours, and the heroine routes (the yandere hell) are only about 3 hours each. The transition between the two parts was pretty well done. It was an interesting read for what it was, and I did enjoy the cheesy thriller parts like a B movie, but outside of the ending there isn’t much to take away from it. The text itself was not bad to read since it was by 小林且典 (Kobayashi Katsunori) with Kikakuya, the scenario writer group that houses the writers of several popular otaku works (Maruto of White Album 2 and Saekano, Hiei Murasaki of the Baldr series, Katou Naoki of Fuuraiki/Kuon no Kizuna, amongst others).

As for technical aspects, the art is bad with lots of off-looking CGs and the music is forgettable. The user interface is also designed by someone who seems like they have never read a visual novel on consoles or handhelds. Nippon Ichi was probably designing the interface and configuration options like it was a low budget RPG, making even accessing the backlog more of a pain in the ass than it needs to be.

Oh, and the twintail student council president who has the most appeal as a normal galge heroine doesn’t get a route. On another note, this is probably the type of game that would only work as a console VN or doujin game in modern days due to the state of the commercial eroge industry. I don’t think anyone actually looks for this type of yandere in eroge lol.