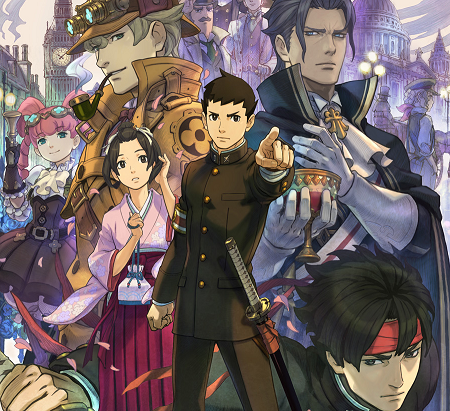 Capcom tries new things for the Gyakuten Saiban (Ace Attorney) series, with an entirely new setting and characters. The end result brings something similar to the Layton vs. Phoenix Wright crossover, since we’re now in England in a time period where familiar technology in the main series hasn’t even been invented yet.

The story takes place in the Meiji period, which marks the era where Japan transitions from being an isolationist nation to opening foreign relationships with the West. In particular, the political relations between Japan and Great Britain play an important role in the setting of the game, so I wish the localization team good luck should they decide to bring this over. You can’t exactly pass this one off as America.

This game places an even stronger emphasis on being a series with continuity, being the setup for a greater journey and ending on a cliffhanger. There’s an overarching plot regarding Naruhodo’s best friend that gets no resolution in this game, and there is most certainly something lurking in the background that wouldn’t show itself until later games, if they are to be made. Unlike Edgeworth, who had his backstory revealed in the same game he was introduced in (so, the very first game), the rival prosecutor here is shrouded in mystery up until the very end, where the game promises that his background will be revealed later on should there be a sequel. Basically, this game is about as conclusive as the first chapter of a new arc in Kiseki. It seems like quite a few people are dissatisfied with things not concluding in one game, but I don’t really mind them making this with a series in mind, provided that the upcoming games get better.

…Which brings me to my next point. Frankly, the writing for the trials need work. Without things like fingerprint and DNA analysis (heck, modern technology in general), it seems like the team is lost on how to write their murders and trials. The cases are probably the weakest in the series, with even the final case being extremely underwhelming. Ever since the third Ace Attorney, they’ve tried going for having connections between several cases so that the final case becomes a more exciting climax due to prior build up. It generally worked, but even that structure fell on its face in the final case in Dai GyakuSai since the case itself was boring. The climax was severely lacking. That goes for most of the cases, with extremely underwhelming mysteries and characters missing crucial details that are right in their face. I guess it’s reasonable for the series to have a slow start, but what is shown here is not very promising.

The stage of the story being set in England actually brings forth some interesting twists to the traditional court found in Gyakuten Saiban. For example, every trial is also judged by a jury of randomly selected civilians, who are much more susceptible to appeals to emotion and ethics/morals rather than hard, cold evidence. When all six jury members vote Guilty, there’s a new element to the gameplay where you get the chance to listen to each of their conclusions and use them against each other to reveal contradictions.

The cases, while not being particularly good, also do new things for the series. You get to witness, first-hand, a not guilty verdict given due to the lack of decisive evidence, falsifying evidence and lying in court that actually went uncaught until later, and a case where you don’t actually go to court at all. Of course, GyakuSai 5 has it beat in both novelty and quality.

The main character themselves are a pretty likable bunch, and I certainly wouldn’t mind seeing more of them. However, unsurprisingly for the setting, a lot of English people sure like to make racist judgments about our Japanese protagonist. The level of racism may be accurate considering the time period, but it sure gets annoying from the player’s point of view. I also wonder how they’re going to localize that.

One of the main draws of this being set in Europe is the appearance of an ikemen Sherlock Holmes (who also bring in yet another plot thread unsolved in this game). He brings along a new gameplay element where he makes a deduction that is somewhat close to the truth in direction, but ridiculously off when it comes to the minor details. Your job is to fix them by replacing keywords that are wrong, while seeing Naruhodo and Holmes make cool poses.

As far as the graphics and music go, they are great and I have zero complaints. The soundtrack is consistently good, best in the series even, and the character models are also very well animated. Despite the lacking specs of the 3DS, the game has good optimization and the animations are better and smoother than a lot of Vita games that try to do the same thing despite the advantage in hardware. I guess this is what happens when you have a big company that actually knows how to properly use the power of the hardware they work with.

As it stands now, it’s hard to tell how the new series will turn out. Dai Gyakuten Saiban is probably the weakest Gyakuten Saiban so far, but I’m willing to give the writing team the benefit of doubt. There are a lot of unresolved plot threads, so the sequels have potential to be good. Please, Capcom, you got me interested with that cliffhanger so you better deliver while I still have hope.