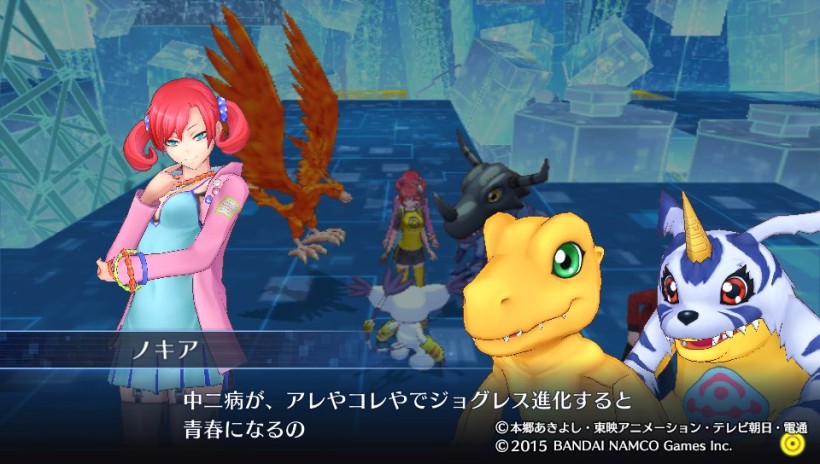 The latest Digimon game, published by Bandai Namco and developed by MediaVision. It’s a turn-based RPG set in a near-future vision of Japan where virtual reality is a major aspect of society, and hackers who use Digimon run rampant. 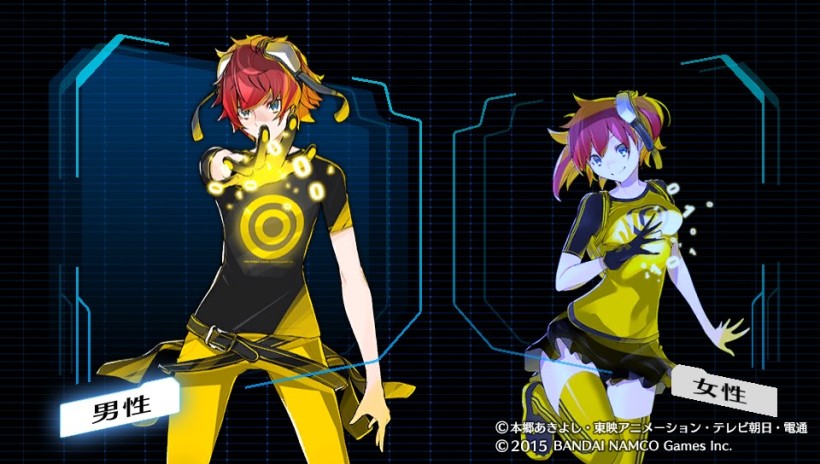 The story has you play as a (mostly) silent protagonist with a selectable gender. You and your two online friends are presented with Digivices and are introduced to the popular “hacking tools” that take the form of digital monsters, AKA Digimon. Your journey through the virtual reality network EDEN as a hacker begins now! …Except you get attacked by a strange digital organism known as an Eater, separating your ‘data’ from your physical body. It turns out that there have been a number of victims to Eater attacks in EDEN, all of whom have been unable to wake up in real life and are resting in a special ward in the hospital — you included. The only difference is that you are somehow still able to wander the real world as a half-digital being, separate from your real body, with the bonus of being able to physically dive into computers! Picked up by a sexy-looking detective, you begin your work as a ‘cyber sleuth’ to solve mysteries regarding digital happenings while approaching the truth behind EDEN. 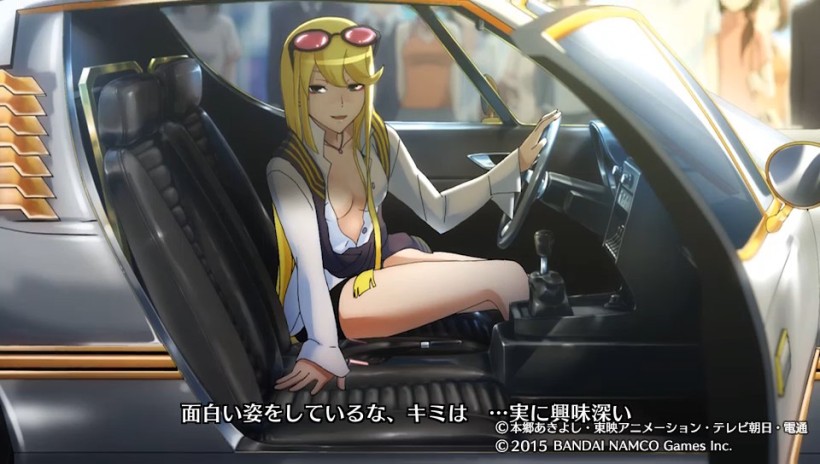 The story is quite long, easily being 50 hours or more unless you rush through it, so there’s quite a bit of volume to the game even for players who only like to play through the main story. Despite a nice start, it slows to the pace of a crawl with a bunch of filler-ish episodes before picking up in the second half. Honestly, the first half of the game could have been much shorter. The second half is when the main story gets going, and it reaches various sci-fi territories that one would not expect given the down-to-earth first half. In fact, later parts of the game bring a visual tone that make you question whether you’ve accidentally wandered into a Shin Megami Tensei game or something. 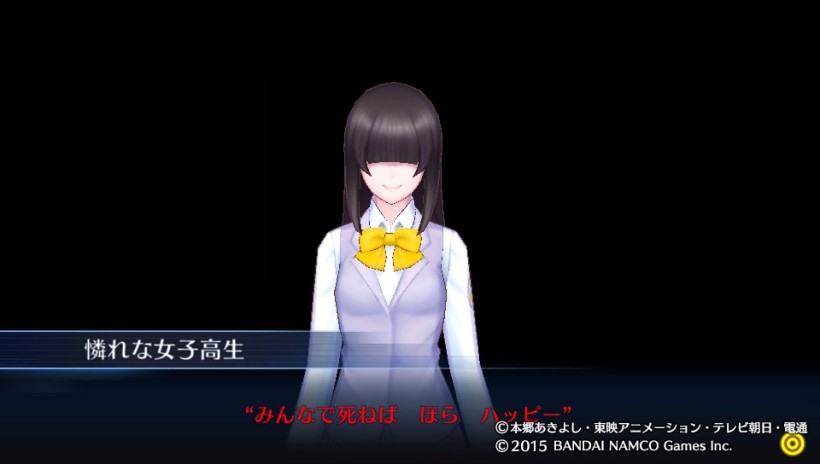 There are also a variety of side quests with their own scenarios, some of which go into unpleasant and creepy territories. One of them involves a shady company that scans girls to create dolls and sells them to dudes as perfect waifus while convincing the guy to never leave his house, except the guy is actually experiencing his life with his perfect waifu in EDEN all the while his real life body is kidnapped and sold overseas. The ending to said side quest also brings even more terrifying implications. Most side quests are lighthearted, which further accents the creepy ones. 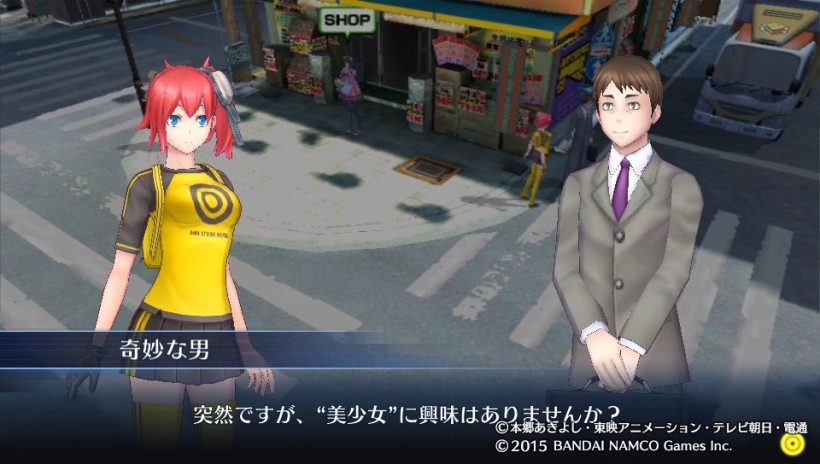 As one may be able to tell, Cyber Sleuth is targeted not just at kids, but also the people who were kids when they watched Digimon in its prime time. The dialogue is written to emulate the ways various teenagers belonging to different cliques speak, so you have a bunch of characters with quirky speech patterns. This often straddles the line between amusing and obnoxious, although I ended up enjoying it at the end. One of the main characters, Nokia, speaks in a very hyperactive city teenage girl kind of way, throwing around slang and abbreviations at every line. In contrary to my expectations, she also ended up being my favorite of the main characters, by far. There’s also the main character’s boss, who talks like she’s from a different era and says some pretty amusing things, as well as loads of infodumps. 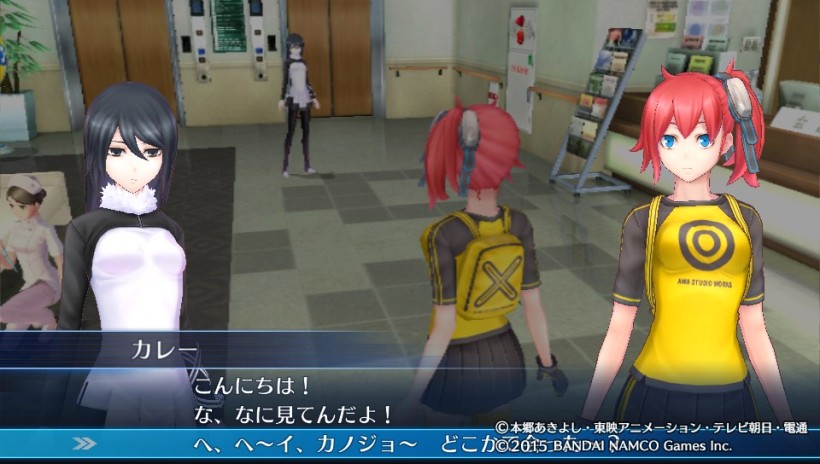 One unintentionally amusing aspect of the game is that, despite letting you choose your gender with no impact on the story, it’s clearly written with the assumption that the protagonist is a guy. You get some hilarious dialogue choices where you can sound like a nanpa while looking like a high school girl, a side quest where a shady guy tries to sell you on a ‘perfect waifu’ despite you being a girl, and a scene near the end where you and your guy friend get into a fist fight but to an outsider, it looks like a dude relentlessly punching a teenage girl in the face. This results in the female protagonist coming off as a very manly girl, which is pretty hilarious. The same thing happened in Phantasy Star Nova, where even if you are a girl, the girls tell you not to peek when they take a bath in the hotsprings. 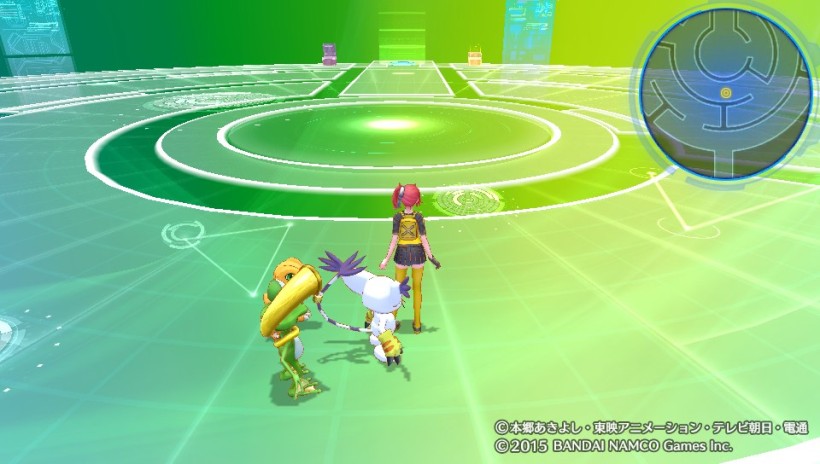 While the story is quite refreshing for an RPG, the same cannot be said for the gameplay. The main draw of the game is obviously the Digimon collecting, raising, and evolving aspect, but the core battle system and dungeon design leave much to be desired. Battles are standard turn-based with 3 Digimon actively participating in battle, which wouldn’t be a bad thing in itself if the game wasn’t stuck on Very Easy for the entirety of the main story. Many bosses went down in a couple of turns, and it all comes down to basic weak point rock-paper-scissors with two levels (one triangle for the Digimon’s type, and another two for elements). I suppose the same can be said for many RPGs, but the lack of variety in the battles gets glaringly obvious a few hours in without any interesting mechanics to cover it up. Having your reserve party members switch in when all of your active members are wiped out in battle would be a nice subversion to the usual JRPG gameplay tropes, if it was a game that actually posed challenge. The only fights that gave me any sort of trouble were from high-ranking sidequests, which ended up being the most fun battles. The majority of the game can be played on auto-battle, and the skill animations are really long without a skip or fast-forward function. There are also many instances of fighting what is basically the exact same boss as before, but with stat upgrades. 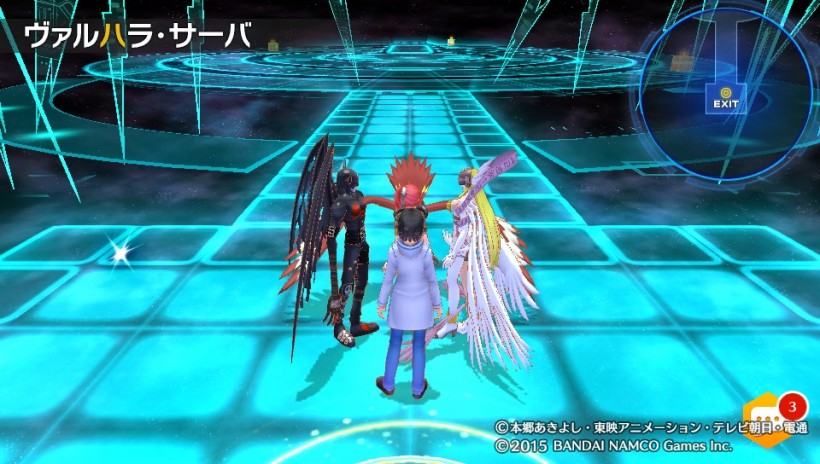 The dungeons are tiny, and what few ‘puzzles’ existed were lazily thought out. The story also requires a lot of backtracking in the middle, so on one hand I’m thankful that the dungeon maps are short and straightforward when revisiting the same place for the nth time, but it’s also hard to get excited when going through the dungeon for the first time. The non-dungeon areas are also quite small, and all maps have a fixed camera. You’d think that a handheld RPG with the ability to save anywhere would embrace lengthier, more complex dungeons since people can no longer whine about save points being spread out too far between areas, but I guess the developers don’t share the same logic.

The most disappointing thing has to be the final dungeon, which is basically a long corridor with some mid bosses blocking your way with nothing else. Not even normal enemy encounters. Just when you think the dungeons may finally become more complex at the second-to-last chapter, the game throws you a map that makes Final Fantasy XIII’s first dungeon look exciting. It’s a mighty shame, because the environment certainly looks impressive. 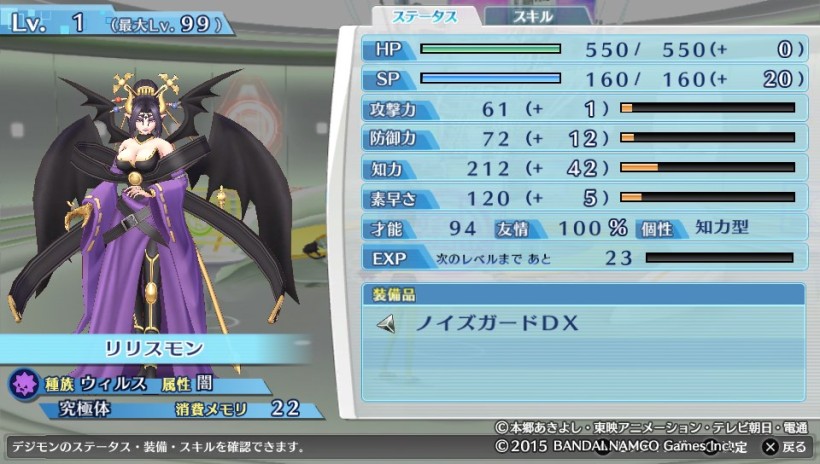 Battles and dungeons aside, the monster-raising and evolving aspect is neat since unlike Pokemon and its set evolution lines, you can evolve and devolve into many different Digimon from the same one. Each Digimon has a unique skill (sometimes two), and a bunch of common skills than can be inherited when evolving or devolving. Devolving requires you to have seen the Digimon to devolve to, while evolving requires the target to reach a certain level or number in a stat. The stronger Digimon also require high talent, which is a stat that increases only with every evolution and devolution (moreso with the latter, giving an incentive to devolve a higher-leveled Digimon instead of immediately). You can store Digimon in farms and have them train to increase their stats beyond what they’re capable of through leveling up, but that happens in real time, and only when the game is active. So you end up having to wait up to two hours while the game is active for your Digimon to finish training and get a few points up in a certain stat. To get good Digimon you’d have to do a bit of grinding, which brings us back to the lacking battle system and long animations that make even auto-battle tedious. 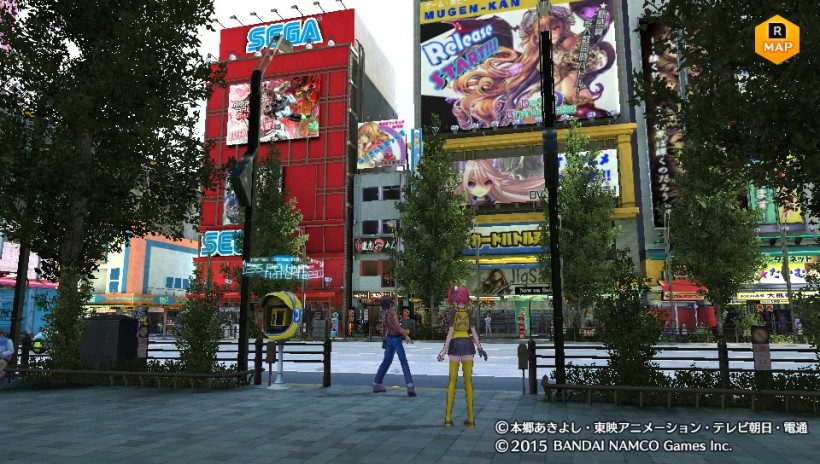 Although there are a good number of flaws with the game’s system, they take a while to really sink in because Cyber Sleuth has some well-done visuals and presentation that leave a good first impression. The environments are rich, the character designs are by Yasuda Suzuhito of Devil Survivor fame, and the 3D models are nicely animated and stay true to the 2D art style. Sure, the game could use more anti-aliasing on its models, but the visuals are good overall. The character models are all great to look at, and there are a number of cool-looking dungeons that mix real world environments with the buggy ‘digital’ look. The final dungeon may not be very good from a gameplay standpoint, but it certainly looks cool. Some of the environment and enemy designs in the second half give off SMT vibes, which certainly isn’t a bad thing. The animated cutscenes are also nicely done. Also the female characters have nicely modeled tits and thighs, which is always a plus (for me). They’ve got better shape and look lewder than most 3D galge and games that sell on fanservice.

The story, despite its slow first half, and the presentation of the game is good overall, so it’s truly a shame that the game is so lacking in difficulty. I guess light combat and dungeons that can be quickly gone through are selling points these days, but if they wanted to appeal to an older audience like the visuals and story imply, they could definitely have provided difficulty options instead of having the game be stuck on Very Easy. More engaging dungeons would also be much appreciated. For better or worse, it’s a very ‘modern’ RPG in both setting and game design. Even with its shortcomings, I enjoyed the 50-60 hours I spent with it. 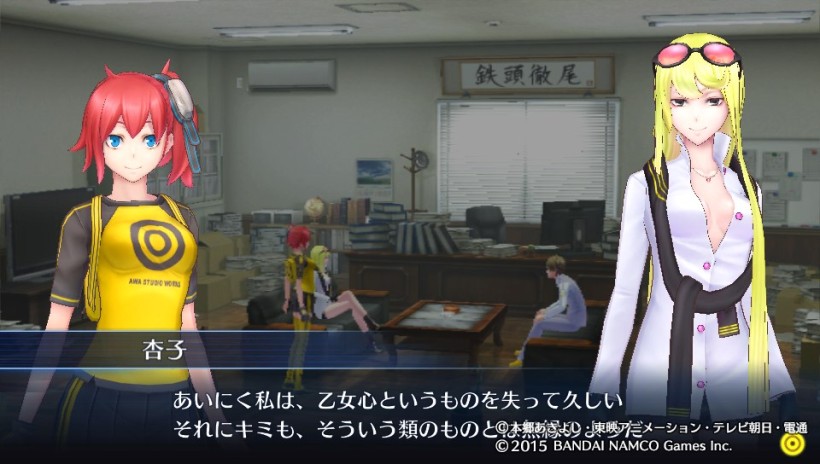