In the world of Senran Kagura, bigger is always better. That applies not only to breasts, but also food. In Japan, some restaurants allow you to super-size your meals, sometimes to massive amounts. Those supersized meals are called dekamori, and Dekamori Senran Kagura is all about huge plates of food…in addition to other huge things that the series is known for, of course. 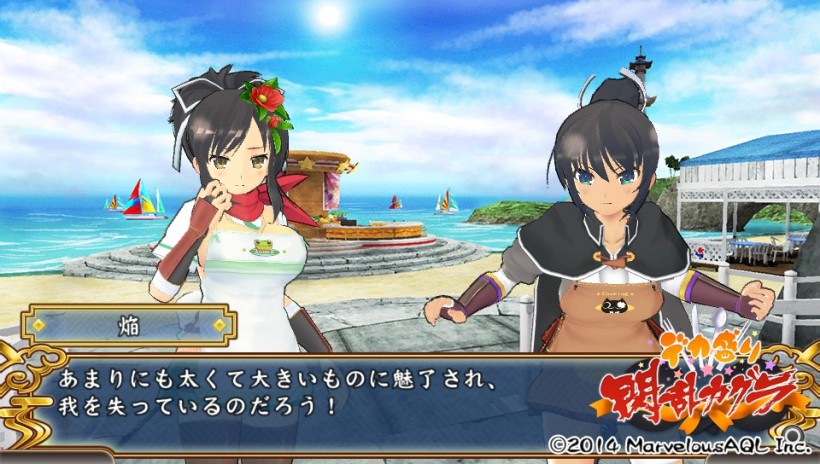 Released as a digital download-only game, Dekamori Senran Kagura is a cooking rhythm game using the characters and assets from Shinovi Versus. A huge cooking contest is being held, with the prize being a ninja scroll that can grant the user a single wish of any kind. The 20 girls of Shinovi Versus face off again each other in a heated cooking contest, where they “cook” through a rhythm game.

Each of the 20 girls has her own story, which is told similarly to that of a fighting game where each character’s side is its own canon. They are also 100% fanservice and played for laughs. Asuka, disappointed at the waning popularity of sushi rolls compared to chopped up sushi, is participating in the cooking duel to spread her love of “huge and thick things.” Katsuragi is aiming for the prize scroll so she can make the world into her oppai harem…

…and actually succeeds! This game is entirely unrestrained when it comes to actually carrying out its ridiculous joke plots.

The cooking duels are done through a rhythm game portion, where each song has 3 stages that are separately judged by old man Hanzo, who will shoot a beam out of his mouth screaming “IT’S DELICIOUS!!!” and proceed to show appreciation for your food in a way no one else will. Who else will swim in an ocean of your curry towards the sunset, while thinking of his nostalgic youth?

The third stage’s result determines whether you win or lose, so even if you do well in the first two stages, screwing up in the third means defeat (and yes, it is entirely possible and a common occurrence that you perfectly combo the first two stages and mess up hard in the third). That’s true for the opposite as well, although clothing damage occurs to the opponent only when you win a stage, so you gotta win all three stages in the song if you wanna strip your opponent naked and have some “dessert”…

There are three difficulty modes, with Easy being really easy and Normal being anywhere from easy to hard, depending on the song. Easy and Normal only use 6 buttons (Left, Down, Right and Square, X, O), but Hard uses all 8 and is a massive jump in difficulty from Normal. I have terrible reflexes so I can’t do it. The game makes you switch buttons around, a lot. It’s fairly forgiving though, as the time margin for error is huge compared to other rhythm games.

Most of the music is instrumental, and I feel that a lot of them aren’t really rhythm game material. Only each school’s leader gets a vocal song, plus DLC characters Daidouji and Rin. They require DLC to play as, but appear normally as opponents in the story. The good thing about this game is that since it uses all of Shinovi Versus’ assets, all the DLC there can be used here, including the DLC characters. I never bought any DLC because I still haven’t arrived at the point where I want to pay 300 yen for an outfit, but good news for people who did.

It’s been forever since I sat down and played a rhythm game, so Dekamori was fun and refreshing. The fanservice, too, as it managed to be entertaining and stayed true to the characters’ established traits, and had the guts to carry out the silly plots to the end. It’s probably the lewdest Senran Kagura to date, as the “desserts” look racier than ripped up clothes or being fully naked normally.