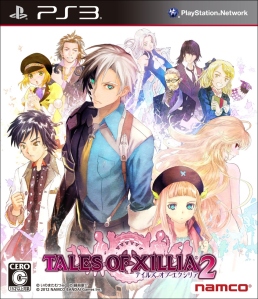 I haven’t touched the post-game dungeon yet so it’s probably hard to call this a full review, but for now here are my thoughts upon getting the ending.

Xillia 2 was a much-needed sequel due to the rushed nature of the first game, and improves on it quite a bit while also trying things that are new for the Tales franchise. They made the protagonist Ludger a silent MC that the player has control over dialogue choices with. Think Persona 3 and 4’s protagonists, except Ludger himself is more established personality- and action-wise . At first I wasn’t a fan of the departure, but I ended up liking Ludger a lot so I guess Namco’s experimentation worked out.

Tales plots usually try to do a bunch of things with many characters at once, but Xillia 2 makes it so that the main plot is concise and focused, and stories relating to other party members are told through side chapters. Ludger is in debt, and he has to pay it back bit by bit to his former-classmate-now-debt-collector, Nova. To unlock the next chapter in the story, you have to pay back a certain amount. In between each chapter of the story, you get a period of free time where character-specific side chapters are available. Character stories are unlocked by progressing the main plot and raising Ludger’s friendship with the character. They provide some neat information on the current state of the world, as well as what the Xillia 1 characters have been doing during the one year gap between the two games.

Paying money to progress plot was irritating at first, but money falls into your hands easily if you hunt Gigants (optional boss-tier monsters that net you a huge monetary reward at the quest board) or do the random hunting/item collecting quests that tend to be pretty easy and straightforward. During the latter half of the game, I hardly ever had to go out and hunt regular monsters for quests, because I got enough money from Gigants and the main battles. As you pay back your debt, you unlock more areas in Elempios/Liese Maxia, and you can freely roam them unless the main chapters happen to restric map movement.

Battle system was an improvement, with more Link Artes, real side-stepping, Gaius and Musee playable, and Ludger being a jack-of-all-trades that can switch between three weapon types. Side-stepping should now be a permanent feature in Tales, it’s so much more fluid than free run. The skills system allows pretty flexible customization to fit according to your play style, and there are plenty of ways to recover TP. Graces was my favorite, combat-wise, but Xillia 2 outclasses it now that you can side-step without sacrificing aerial game. I still liked that game’s balancing of characters and how it made everyone fun to play as, but Xillia 2’s close, too. Bosses still like to break out of your combos, and I don’t remember enough about Xillia 1’s bosses to do a proper comparison, but I *think* I had a slightly easier time in 2 on hard mode. Final boss was a pain in the ass, though. Also Jude got nerfed and is now slower in his attacks.

Story-wise, I was more or less satisfied. The main premise involves Ludger and co. entering and destroying alternate worlds by seeking out their “Time Factors,” the thing in the alternate world that is the most different from its real world counterpart. Throughout the game, you see many possible outcomes if history or events in the first game had played out differently. Some alternate worlds show a grimer and darker future (e.g. Elempios and Liese Maxia remaining separated to this day), while others can get quite sentimental with a brighter outcome that never happened (like Agria taking Leia’s hand before falling). Pacing is tight if you speed through the main chapters, but I took time to go around fighting Gigants, doing side chapters, and searching for a cat lady’s 100 missing cats, so I finished the game at a very slow 63 hours. The game also tries to do multiple endings, with Good and True ends that split off from choices after the final boss fight. There’s also a bad ending that happens slightly earlier on (which I missed), as well as bonus endings that come from completing some post-game stuff. The True and Good endings were of the bittersweet variety, but they fit in with everything that was established in the story, and Xillia’s atmosphere. To be honest, I liked the Good ending better than the True ending.

The character quests are definitely worth seeing, as they show the development of the Xillia 1 characters who join the party but don’t really get to shine in Ludger’s story. They also do a good job detailing the effort and difficulties of bringing together Elempios and Liese Maxia, as well as humans and spirits. Jude’s and Milla’s stories, in particular, were really satisfying and gave things a good closure. I didn’t like Jude in Xillia 1, but he got a lot better this time around. I knew it, the kid just needed a figurative smack in the face to get his act together, and he sure managed to grow a lot during the one year time skip while keeping the highlights of his personality from the first game. Of course, Milla is glorious, as usual. For a while, you get to use a tsun Milla from an alternate world where she no longer has the Four Great Spirits because they needed an excuse to not give her Ifrit-spam from the get go. Alt Milla was pretty cute as a template tsundere, but can’t compare to the true Milla and her hilarious skit ボケ moments. Ahhh, I missed the skits about food and binding.

No, seriously, Milla’s combo of cool and collected during main plot but total dunce in skits hits my weak points too hard. Musee and Gaius were great, too.

It was also cool of them to work in additional scenes into the main plot to acknowledge your seeing the side chapters too, even if they are pretty minor.

Removing the ability to swap party members on the go was a terrible design choice, and probably my primary complaint. It’s a lot less convenient to experiment with party setups than previous games.

There’s plenty else I could complain about, like the loads and loads of reused assets or the few amounts of new areas (especially Elempios, which I was hoping to finally get to explore more of), but to be honest, I wasn’t really that bothered. The wonder of seeing new areas as you go through them for the first time is nonexistant, but it sure was nice revisiting some of my favorite areas from Xillia. イル・ファン looks beautiful, as usual. The character designs were a nice departure from the usual, with almost everyone decked out in some sort of suit or clothes that fit their day job. It’s a lot more practical looking than the fantasy-like designs of the first game, and provides a stark contrast between working humans and Milla and Musee’s otherworldy designs (especially the latter). Ell is a good loli.

I just looked up the Tales of…writers and apparently Xillia 2 was written by the guy who wrote Hearts. Sure explains why I ended up liking it a lot. He is also apparently working on the scenario for Zestiria, so now I am slightly more hyped.

Now I just need to work to pay off my debt and get the hotsprings scene.