Nitroplus’ other eroge featuring mechs. My Nitroplus virginity was taken with Muramasa, so I couldn’t help but draw comparisons between the two while reading. If Muramasa’s tag line is This is Not the Story of a Hero, and its reoccurring theme of 善悪相殺 explored the hypocrisy in the concept known as “justice”, then Demonbane is Ayane Ichijo’s kind of story. It is the tale of a hero who fights against an organization of pure evil, a defender of justice who protects the weak. Indeed, Demonbane is an eroge that follows orthodox good vs. evil themes with mechs and Lovecraftian elements. It is extremely over-the-top.

I don’t really feel like typing up a full review and forgot a lot of what I was gonna say considering I finished the VN a month ago, but here goes.

Daijuuji Kurou is a university dropout, self-employed detective who gets no cases and is so poor he leeches his meals off of the local church. He once studied in the secret magic course at university, but quit when he went to the basement to find a Grimoire and witnesses what no human should see. His hobo life comes to an end when he is hired by the rich and powerful Hadou group to find a Grimoire, which is required to pilot Demonbane, a man-made giant robot with power that rivals a Deus Machina. He meets Al Azif, the personification of the legendary Necronomicon, and reluctantly becomes her master after some persistence on her side. Together, they pilot Demonbane in order to defend Arkham City against the evil organization Black Lodge, and ultimately defeat Master Therion who is its leader.

The battles are mostly done through giant robots called the Deus Machina, which are powered by magic and can pull ridiculous physics-defying stunts and have attacks that casually bend space-time continuum. The setting borrows from the works of HP Lovecraft, so in addition to giant robots there are also horrifying creatures later down the road. It feels like the setting is trying to do too many things at once, and the battles are extremely hot-blooded with lots of yelling and a protagonist whose fighting ability is directly proportional to how angry he is. That stuff is to my liking, but how straight it plays into shounen action cliches would probably irritate a myriad of other people. Black Lodge is pretty much pure evil and Kurou starts off reluctant but quickly becomes the standard hero who fights for justice, so ultimately the ideal hero vs. villain plot plays out.

There are three routes, and the VN sure would have benefited from an enforced route order. Al Azif’ route is likely intended to be the true one and should be played last, but dumbass me played it first. Al’s route is the most satisfying and also feels the most complete, but the other two routes reveal some pretty important information regarding several crucial characters and also end with the defeat of the same final boss. I expected the other two to have less-than-satisfactory endings or consist of a different final battle, but all three routes’ final boss fights play out rather similarly. The common route is rather long, and even the individual routes have loads of copy-pasted text and very-similar-with-the-exception-of-a-few-lines scenes where the ‘skip read’ function does not work. The three route structure would have been more interesting had each of them focus on a different villain, but the amount of similarity in each route makes reading a good deal of Ruri’s and Leica’s a chore. The fact that there was only one group of very template villains made Demonbane too long for what it is.

The story structure begins off much like an episodic anime with each chapter having an enemy robot of the week before switching it up with more plot-relevant enemies. The early villain is a campy genius scientist named Doctor West and he is more entertaining than the remainder of the villains who happen to be more threatening in ability. They’re all very cheesy and cliched villains, so obviously the one with maximum cheese takes the win. There’s some slice-of-life in between the plot and action, but the slice-of-life scenes are highly exaggerated. This stuff is entertaining for the first two hours or so, but quickly becomes tiring. Kurou is an A+ narrator, through. 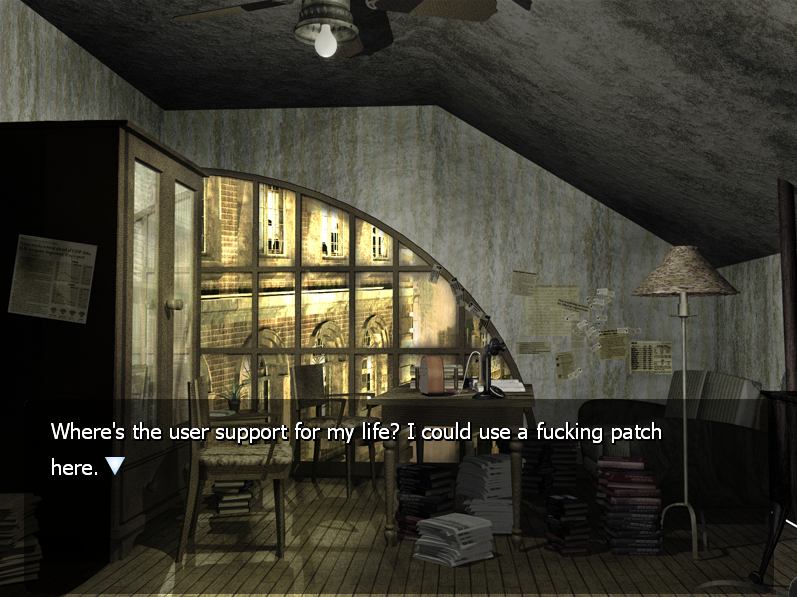 Overall I do like template stories about weak individuals gaining strength and standing up against injustice, so I enjoyed the first few chapters a lot with the over-reactive protagonist and campy villain who likes to create mechs with drills to cause trouble. However, Demonbane grows tiring fast as flashy battles with heavy property damage remain interesting for about the duration of one action movie, and the story went into too many directions. Things pick up again at the climax, and the game delves into a final string of battles that is somewhat reminiscent of Muramasa’s true route battles (or the other way around). The chapters in the middle were tedious though, and the ero doesn’t help.

The heroines aren’t very memorable by 2013 standards, but Demonbane is a decade old so I would probably have a strong impression of the them if I played it much earlier. Final ranking would be Al>>>Ruri>>>Leica. Initially the only one I cared for was Al Azif, whose cute design combined with the smartass and prideful “I am 2000 years old, know your place” attitude made for a very entertaining heroine. However, my opinion of Ruri highly improved in her route. Leica isn’t bad per se, but her personality was never the type I cared for in the first place and her lackluster character design did not help. On a side note, the HCGs also look terrifying because Kurou’s dick is ginormous. People weren’t kidding when they compared it to horsedicks.

So my opinion doesn’t extend much farther than “it was alright” since I came in for hot-blooded battles with giant robots and received them. It’s much easier to sit back and enjoy the cheese and over-the-top fights, rather than stand up-close and nitpick.