And boy, was it boring. The route in question was Agnes’ route, which I picked because her character design was to my liking. Seeing how it took me a month to finish a single route, this might just be the most boring moege I actually completed a route in. Witches’ Garden by the same developers didn’t exactly have a plot until the last 2 routes, but at least the common route was relatively short, there was much ichaicha to be had, and the last two routes were pretty decent. In contrary to the former, Shukufuku no Campanella had a massive and yawn-inducing common route, dry romance (at least in this route), and what little plot at the end was uninteresting. But the complaints mostly go towards the common route.

RPGs may be fun to play, but they are about the most boring video game genre to watch someone else play unless it happens to be one of those times where you want to see the story but not play the actual game for whatever reason (I’ve only ever done this with Tales of Legendia). It’s fine and dandy when it’s a boss video, or a fast-paced game like Ys, or even a story cutscene video set. But when you watch someone else trudge through dull sidequests one after another and yawning every ten minutes or so, it is a pretty good indication that you should do something else like actually playing video games. Do you really want to watch someone else hunt common monsters or look for a rare flower in a massive forest? Me neither.

What do RPG fetch quests have to do with this eroge-turned-PSP-galge? Plenty. And not in any sort of good way. Shukufuku no Campanella takes place in a lazily-constructed fantasy world and tries really, really hard to emulate an RPG. The main character belongs to the clan Oasis, where they accept and fulfill quests. That’s all good since I like fantasy settings, but there’s this system where you select what quests to take and may or may not have to do a ridiculously easy battle or some clunky gameplay element like a point-and-click search. Really, there is no challenge or fun to any of these since there is no controlling your character, leveling up in dungeons, or gaining new skills like in an actual RPG. The battles are pointless since they are pretty much scripted and if you lose you just get a game over with an option to immediately try again. You can’t improve or customize characters outside of battle, and you basically have no degree of freedom whatsoever so the gameplay elements are better off not existing. Honestly, it feels like they only put in the battles there just so they don’t have to give you a badly written fight scene each time the party fights some kind of monster. 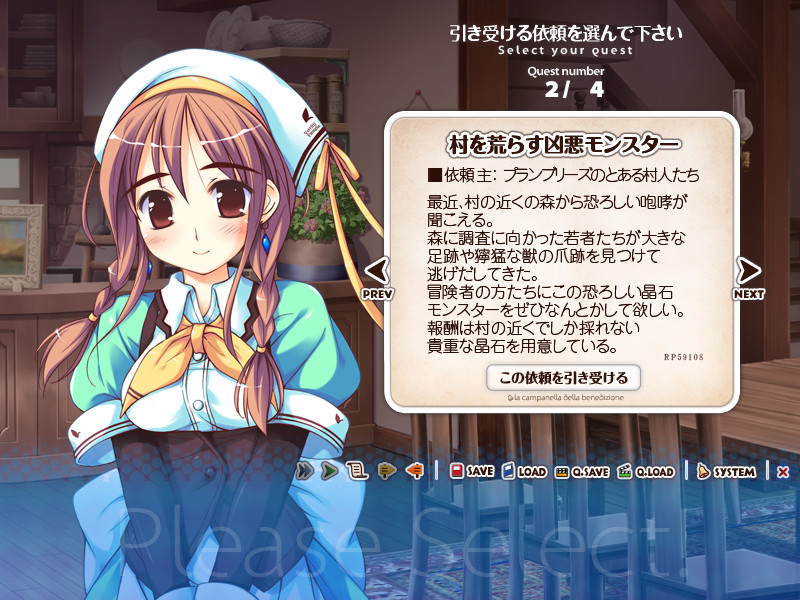 There’s also the quests. Whenever you choose a quest, you basically see a long, drawn-out scene of the party going out and fulfilling the quest, possibly ending with some kind of battle using the game’s simple and restricted battle system. These quests tend to be typical RPG sidequest-level things like monster extermination or looking for a rare flower or the ever-so-interesting helping other people transport stuff. When you’ve got a scene describing a group of adventurers going on an item search in meticulous detail, said adventurers better be doing it in a funny or interesting way, or at least have entertaining conversations to justify all that text. The main party in ShukuCampa is composed of polite, friendly, and cooperative people who are good at their job and complete their quests smoothly and properly without any major challenges or sense of tension. There is hardly any risk of failure, no engaging bantering between party members, and disagreements and arguments almost never happen. The characters are all really flat and dry, and that goes double for any conversations between them.

The entire common route barring the prologue is pretty much entirely composed of this boring quest system instead of any actually enjoyable fantasy slice-of-life. For the record, the entire game is 3 chapters long, and the first two chapters is basically dedicated to this pointlessly tedious (in terms of reading) system. Towards the end of the second chapter the protagonist started having feelings for Agnes, and the third chapter is where the actual plot comes into play.

I’m not surprised if they wanted to use the common route’s quest system to pad out the game, because the story in the final chapter is honestly not very good. Because the main characters never faced any major rough spots in their quests and the one main possibly threatening “antagonist” decided that they no longer had any reason to mess with the main party right when the actual plot starts moving, it was hard to actually feel the tension that the characters are supposed to feel. They tried to do the type of scene where the main party splits up to face masses of incoming monsters and hold back enemies to let the protagonist proceed on to the final boss area, which is a very common tool to use in 燃えゲ and gives a great sense of hot-blooded excitement when executed well. That only works if there is tension and the threat of danger, which ShukuCampa tried to stuff in at the last minute and ended up being badly contrived.

One of the main highlights of a moege (this time written as 萌えゲ) is the interaction with the heroine and the “hnnnnng”-inducing romantic scenes (and the ero, which may be bundled with the latter). However, in this route, the relationship between Leicester and Agnes was really dry, and there wasn’t much room for ichaicha in the short interval between the monotonous quests and the start of the actual plot and drama. I played the CS version on the PSP so maybe the ero made the game better, but I wouldn’t know. Although I do admit that having good ero might make a moege better, the Witches’ Garden h-scenes were pretty standard so ShukuCampa is probably not any better. Ero has become more fappable on average throughout the years (at least for moege), so this average eroge from 2009 probably doesn’t have anything impressive on the erotic front.

I’m not sure if Agnes’ route was the best to use for judgement since there may be some tiny sliver of hope for plot in Minette’s route, since she is clearly the focus character of the game. Maybe her route will turn out decent like Ayari’s routes. But I have no interest in Minette as a heroine, as pretty as her design is. She calls Leicester “Papa” and actually acts like a daughter instead of a ranked-up little siister type. I had no problems with Makina in Grisaia, who turned out to be my favorite heroine from that trilogy, but Minette is literally clueless and doesn’t do much in most scenes except for saying “Fueeee~?” and questioning things about the world that should be common knowledge. Her character doesn’t add any enjoyment to most scenes and she’s just kinda there to be cute and babysat. She is like a legitimate young daughter and that doesn’t exactly interest me as far as eroge heroines go. I like ’em young, but not to that degree…

Anyway, I am not sure if I want to just drop this game, but I’ll try another route and see. Maybe Carina or Chelsea. Also, the UMD loading times are ass and sure ruins my enjoyment of it being portable.