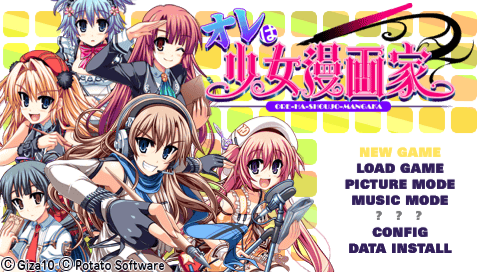 Does the art look familiar? This game has the same artist as Henshin 3, that nukige about a guy who could turn into objects. Except Ore wa Shoujo Mangaka is a PSP-original galge made by Giza10, a sister company of the wacky nukige company May-Be Soft. Thus, it is non-ero…

Yeah, they hid their eroge roots pretty well and there’s no way anyone can find things that are inappropriate for the squeamish masses.

Kamio Kenji, is high school student by day and shoujo manga artist by night. He debuted when he was 13 years old with his hit work and was touted as a genius, but work hasn’t been going so well recently since his past three manga serializations have been discontinued. In Comic Charm, the magazine he is serialized in, there is a weekly popularity ranking for its manga and those who fall too low will be discontinued. If his next manga gets discontinued as well, he will get kicked off the mag so his (non blodd-related) onee-chan and editor decides that he should crossdress and have a public signing event to generate hype. After all, Charm’s steady #1 in the popularity polls is a cute, idol-like teenage girl.

While routes are decent for a moege and mostly consistent in theme since the focus on manga is rarely taken away, the setting feels too idealized. Not only are there multiple characters who debuted with their manga at the age of 13 and are full-fledged professionals by high school, there is little reason why the characters should be in high school from a narrative standpoint. Kenji goes to a high school where many students are skilled in the arts, and he and his classmate, Akizuki Rinna, are serialized manga artists while his childhood friend and assistant does architectural drawings on par with a professional’s. The story is mostly centered on the manga-drawing aspect and there are very little events that specifically require a high school setting. No school festivals or anything. It could have taken place in an art college and things would be much more believable with minimal changes. But of course, being a PSP galge, and a moege on top of that, having anything other than a high school setting would be hard to sell, and the genre isn’t exactly known for realism.

The optimistic moege nature of the story also tends to contradict with some of the manga-writing theory presented in-game. In Chika’s route, the reason why Kenji’s manga fails is because the setting is too idealistic, the story lacks realism, and ultimately his manga was no different from a school romance in development even though it featured a working heroine. The first two statements can describe this game as well, since Kenji’s life as a high school manga artist is much smoother and more upbeat than it should be. Trials and hardships are smoothly overcome and positive moments are really positive. On the bright side, the story does take manga seriously, and the manga-drawing focus is interesting enough of a gimmick to separate it from other galge. The crossdressing plot ultimately served little purpose outside of one route since Kenji’s identity gets revealed rather early into each route, and the general public hardly makes a fuss about it.

I do give Ore wa Shoujo Mangaka for being focused in most of the routes, as it never strays from its theme of manga as an expressive medium that mirrors life. In each route, Kenji’s new manga differs depending on the heroine he dates and the drama that comes with it, and it almost always is based on his real life relationship. His previous manga failed despite having a gripping beginning due to jumping the shark with ridiculous plot development, but he succeeds when he has a clear vision of plot direction from the beginning and writes what he knows.

The characters aren’t anything special and the heroines are rather flat since it feels like Kenji gets more development than most of them in their routes. The cast is made up of generally likable stereotypes that seem to draw more from manga and all-ages media rather than eroge, with an awesome childhood friend.

Kamio Kenji – A guy with some stock protagonist traits that balance out to an inoffensive character. He is a shoujo manga artist who keeps his gender a secret in fear of ruining little girls’ dreams. He has his idiotic and hormone-run teenage boy moments (like accidentally sticking panty shots and huge tits into his shoujo manga), but they are mostly played for comedy and he usually has his shit together when the situation calls for it. He debuted as a manga artist at 13, but recently he is in a slump since his work has been getting discontinued and he is falling in popularity. Although starting off with strong characters and a gripping premise is his forte, his plots go to shit real fast. 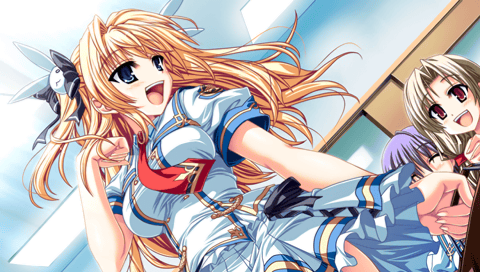 Akizuki Rinna – Kenji’s rival manga artist, and the author of the long-running manga Sandy Magic which consistently secures the number one spot on the popularity rankings and has a popular anime adaptation. She is known as an idol manga artist since she keeps up a pleasant appearance and remains sociable everywhere, along with never missing a deadline and consistently pumping out successful chapters. Despite appearing to be the main heroine, her route is actually the most lacking in conflict.

Hatori Hisui – Kenji’s childhood friend and assistant who draws his backgrounds. Snarky and sharp-tongued, she is constantly making fun of Kenji and spouts witty comments during cheesy situations, playing the tsukkomi at all times. However, despite always insulting Kenji, she is capable and reliable, willing to defend and stand by him no matter how tough the situation gets. Also draws in a maid outfit and school swimsuit for motivation purposes. Definitely the best girl, even if the drama in her route was blandly handled. 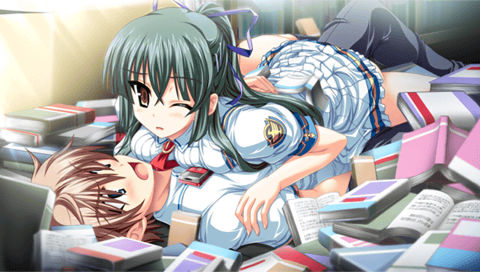 Shidou Kaede – A calm and studious class president whose family runs a bookstore. She has an irrational hatred for manga that stretches beyond simple elitism as she happily consumes all other forms of media and entertainment. Also, in contrary to her image, is addicted to texting and is able to type 5000 character texts stuffed with difficult kanji in a matter of seconds. Her route was the best when it came to serious moments and 感動, with a naturally developed romance and logical conflicts. 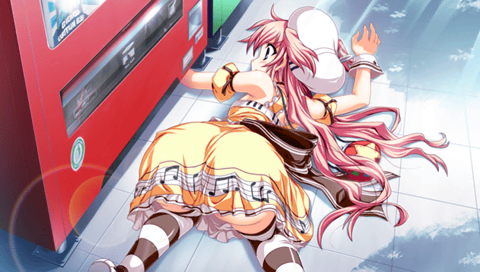 Takasugi Haruka – A voice actress who is poor in the monetary sense but rich in talent. Kenji first encounters her searching under the vending machine for change, and befriends her by treating her to a meal. Even though her voice acting skills are superb, she screws up during auditions because being on a stage full of expensive equipment makes her nervous. Her route is the gag route where most conflicts are exterior and solved through comedic means because Haruka herself is mostly free of flaws–energetic, optimistic, talented (and later popular) voice actress, and a genius comedy writer. Her only downside is being poor,, and that is a result of her sending all her earnings back to her family.

Kamio Chika – Kenji’s onee-chan who also works as an editor at Comic Charm. She is a hard-working career lady in public, but is a complete brocon at home and likes to drink beer while showing her sloppy side. In contrary to expectations, she and Kenji never actually become a proper couple, and they remain super brocon and siscon who hug and kiss each other like it’s a normal family thing. The “twist” at the end was so abrupt that it felt like the writers were trolling on purpose and left me with a flat “what”.

The characters are entertaining enough for the role they play, even if they’re quite flat.

Whatever their budget was, very little of it went into the music. The amount of tracks in the game is very few, so the BGM is extremely repetitive, and not even good in the first place.

The art is by the same guy who drew for Henshin 3, so it’s in a distinct and crisp style. Also cannot unsee, since that style was very suited for ero… 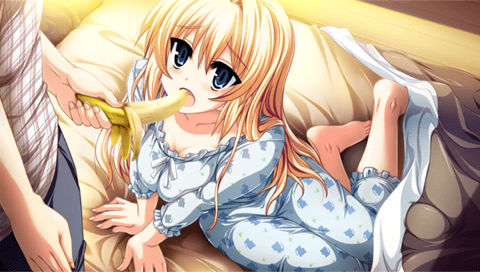 No complaints about the interface. It’s simple and streamlined for PSP controls. The existence of an in-game encyclopedia isn’t necessary considering the terminology used isn’t that obscure, but it’s a good thing to have since some of the descriptions are pretty funny.

Not very realistic or plot-heavy, don’t expect anything more than basic silly fun with a mangaka focus. As a moege, it does good enough a job with an easy to read writing style, lots of slapstick comedy that remains funny for a while, and fast-moving scenes that never drag on (which brings it above school life moege that are much longer than they need to be). I feel like I might have been too hard on it since comedy is its primary focus and I did enjoy its slapstick for the first two or so routes. Ore wa Shoujo Mangaka is a very easy read that doesn’t overstay its welcome and has an in-game encyclopedia for manga terms, slang/internet speak, in-game manga and shows, and any “maniac” level terms, so I’d recommend it as the perfect beginner’s galge.

There’s also a few references to some of May-Be Soft’s older eroge.