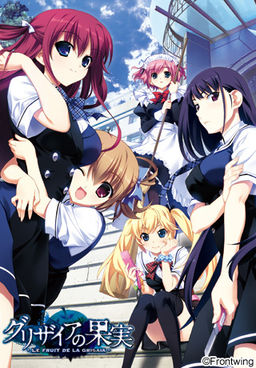 I am getting lazier with each post because summer brings out the extra lazy in people, especially those who don’t have school or work and are instead caught up in a VN marathon. I plan on playing all of Grisaia this summer because it has hard moonrunes and I don’t want to deal with that when I’m dying in engineering. How did it even turn out this way, I was supposed to go to art college. I went through the common route in moon but then the English patch conveniently came out so I gave in and BAM! I went through the rest of the game in a matter of days. Gotta work on them moonrune skills…

While Kajitsu is the first in the Grisaia trilogy, it stands alone as a chara-ge and solves the heroines’ problems. While there are unresolved things about Yuuji himself and hints regarding an overarching plot, it won’t leave you hanging on a cliff or anything so the main thing is enjoying your time with the fun heroines and accepting the drama as it comes (some are better than others by a wide margin).

I went Makina –> Amane –> Sachi –> Michiru –> Yumiko in terms of route order, which is exactly how the common route throws them at you. Unfortunately, that is arguably the order of descending quality so a round of applause for me. Unless there’s an enforced route order, I am guaranteed to do them in the worst order in terms of overall enjoyment. Common route was extremely fun though, since it was slice-of-life with fun characters and unusual humor. Yuuji is the “badass” type of protagonist whose mind is permanently stuck in the military even when interacting with teenage school girls and has a tongue for so much sarcasm it pisses off all of his female superiors. When shit hits the fan though, the guy is really capable. Almost too perfect when it comes to that, actually. Character interactions are excellent, and the game is chock full of military references. Makina was the first one I went for because she is best girl, hands down. Goofy loli who carelessly rubs salt in others’ wounds, curses like a marine, and spews innuendo befitting of a dirty old man like everyday speech is the best loli. Probably A+ example of “kids say the darndest things” except everything she says is probably on purpose and she has the most screencappable lines. She is also surprisingly observant and treads the fine line between a fool and a genius. Her route is the best the game has to offer in terms of plot and pacing, and reveals a lot of the mystery surrounding Yuuji’s past and current job. The plot is pretty much Shitty Rich Family Struggles Dragging Their Teenage Daughter Into Their Shit: The Eroge, except the shit is really deep and next to impossible to get rid of or escape from. Basically play her route first if you want to understand things more smoothly for the rest of the game, play it last if you want to save the revelations for the end. Her h-scenes were also hilarious and made me read through them instead of keeping my hand on CTRL since the ero is pretty much plain ol’ normal sex. The ending is not the 100% happy end but is pretty fitting since there was no absolutely clean way to end off the conflict in her route. Amane’s route is the next one I went on and is probably the second best route. It tackles an entirely different subject and isn’t very fast-paced, but the stuff it reveals are very interesting since it sheds light on Yuuji’s dead sister, who has the best character design in the game thanks to being a white-haired bishoujo. Most of the plot portion of her route is through a flashback, until the end. Unlike the others, her bad ending reveals some information the good end doesn’t, and my sensors tell me said revelation will eventually play a role in the upcoming plot in the rest of the Grisaia trilogy. The good end is rather cheesy, but really sweet. Being the erotic onee-san character, Amane also has the most h-scenes. They are also rather hilarious. Sachi’s route had its good parts but was plagued with terrible pacing. She is the maid who will obediently carry out any request no matter how ridiculous it sounds, and is actually Yuuji’s childhood friend. She’s got some trauma regarding her parents, and this is probably the closest route to a nakige. While the flashback moments are interesting and the ending is nice, the pacing isn’t. It’s better when you get through all the ichaicha/couple slice-of-life first and then put the plot into full motion, but Sachi’s route has the plot part split into small segments between chunks of slice-of-life and it breaks up the tension too much. Also some of Yuuji’s actions left a flat “what” on my face  so I’m guessing the guy isn’t as smooth at dealing with problems that come from the heroine herself rather than an outside conflict. Michiru was fun in the common route as a pseudo tsundere and full-on idiot, but that quickly went down the drain in her route because it piles drama on top of drama and basically leads to a downward spiral of angst. The amount of angst was ridiculous for the length of the route (I think this is the shortest route), and you don’t get much time enjoying the fun Michiru. The drama and self-loathing was excessive to the point where I want to scream less is more at someone. Yuuji’s actions on solving her problem is also…well, the guy really likes the sink-or-swim method of training. Angst and drama is good when carefully written, but here they just shoved it too hard in the reader’s face. Yumiko, being a kuudere with long black hair who proves herself a good ally in some of the other routes, is a character type I usually like. Unfortunately the most memorable part of her route was Yuuji throwing a frozen turkey into the engine of an airplane. She shares the whole Shitty Rich Parent Suddenly Wants Kid Back For Corporate Reasons plot with Makina, but the execution here is much worse. The brooding was excessive, the latter half is anticlimatic, and Yumiko’s dad is clearly a less competent villain compared to Makina’s mom. The ending is happy, but it feels like a poor man’s Makina route with none of the tension and more family angst.

Overall Makina had the best route, and Amane had the most well-handled angst. Those two are also the best in terms of plot and hilarity of the h-scenes, and feel like they would be the most important in the overall story. Yuuji feels too capable as a protagonist, but he’s pretty entertaining in the slice-of-life scenes and has his shit together, and pulls some really over-the-top acts (best of him is shown in Makina’s route). Overall, I genuinely enjoyed the characters and a good chunk of the scenario despite some complaints, so I will go on with Meikyuu and Rakuen. I should have done the routes in reverse order to end the game on a high note. Plot-wise it was worth it for Makina’s and Amane’s routes, and character-wise it was excellent throughout the common route and good through all routes barring Michiru’s where you get no time to enjoy your tsundere before being plunged into the angst.

One thought on “Grisaia no Kajitsu – Thoughts”