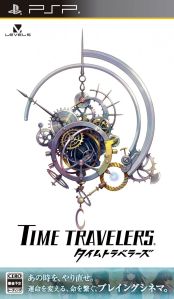 Level-5’s adventure game about, well, time traveling. You can’t exactly call it a visual novel, because the story is told through animated cinematic sequences with automatically advancing text (more like subtitles to the dialogue) for the most part. Some parts have narration where you have to manually advance the text, but those are pretty brief, and the game is heavily dialogue-based. It feels like watching a long movie or drama, rather than a visual novel. Language is pretty standard outside of some of the scientific/sci-fi terms, and there’s furigana over all kanji so it’s pretty low in terms of reading difficulty. 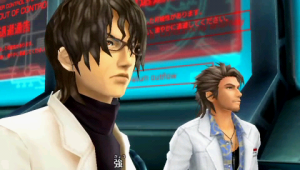 On April 28, 2013, a hole opened up in the sky above the Cylinder Lab, causing many deaths and injuries towards researchers working there. The lab is now sealed off to the public. The game takes place on April 28, 2031, through the eyes of five seemingly unrelated strangers whose stories happen simultaneously. While their stories seem unrelated at first glance, one’s actions affect events encountered by another, and their paths collide more the further into the story they go.

While the idea of having multiple different stories happen simultaneously and eventually converge is one that I love (really enjoyed EVE Burst Error’s multi-sight system), I failed to really care for any of the protagonists in Time Travelers. While there’s nothing really wrong about them, they’re also not very distinctive for the most part, with the exception of Ressentiment, a 30-year-old overweight and unemployed high school drop-out who wanders around the city pretending to be a superhero. I liked his concept, but not so much in execution because a character as pathetic and delusional as he is should receive much more time for believable character development rather than a fraction of 11 hours. The other protagonists could turn out interesting as well if given enough time to become fleshed out, but the game’s story is only 10-15 hours long (closer to the former).

The story, while interesting enough for some simple entertainment, feels rather shallow. Most of the sci-fi takes place at the beginning and the end, and the mysteries surrounding the main incident aren’t that compelling. A lot of the plot twists are fairly standard for the genre, so it’s not very strong in the surprise factor either. The game introduces many side characters, most of whom fail to be worthy of caring about. The writing also suffers from some illogical scenarios that feel fitting for a Yu-Gi-Oh! anime and nothing else, and the fear of killing off side characters for real. Using time travel to handwave the latter point is impossible, due to the very limited time traveling abilities of the protagonists. For anyone expecting some kind of mindblow at the end like the Zero Escape series, you’d be in for a surprise in that there isn’t anything particularly worthy of being called a mindblow. 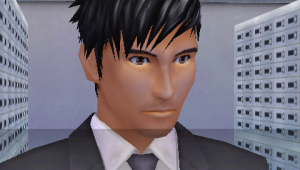 The comedy elements aren’t laugh-out-loud good, but are not cringe-worthy either. Particularly memorable is in the detective’s storyline where you can choose to watch the wrong tape, which turns out to be an R-18 video. He stares at it intently, and only stops because he realized that he is standing next to a minor.

The gameplay consists of making choices (most of them are timed at 10 seconds), time traveling (selecting a point in the flowchart to jump to), and Playing Cinema Events. Playing Cinema Events, or PCE, are sequences where you have to press a combination of buttons shown on the screen to make the character carry out an action (e.g. a punch, dodge, etc.). These are scripted, slow, and very easy because you only ever have to press on button at once. They feel fairly pointless. There’s a lot of choices, but the game’s story is linear so whatever effects of your choice is immediately shown. A bad choice will lead immediately to a negative outcome, forcing you to rewind time and pick something else or progress another character’s story. The game is very easy, and you will rarely, if ever, get stuck. The best implementation of the choice and time traveling system is presented in the last stretch of the story, which is a shame because the remainder of the game treats you like you don’t know what you are doing. Either way, the gameplay isn’t anything challenging as far as adventure games go.

The visuals are kind of a mixed bag. While I find it impressive how the entire thing is animated and feels like watching a movie with 3D game engine graphics, a lot of the textures are really low-res, and sometimes the facial expressions don’t look right because the 3D models that the PSP is capable of are unable to convey the more subtle human facial movements. Character movements look decent, and it’s not like the models are from the uncanny valley or anything like that. Music is not bad, but not that memorable. The J-pop song that pops up during Hina’s story sounds jarring though, and using the instrumental version would have been less distracting.

I’m probably being too hard on the game, as I feel that ultimately, it’s a good starter adventure game of sorts that’s pretty solid if you aren’t expecting something like the Zero Escape series. My expectations were too high considering the game’s budget. There’s a lack of story content since I clocked in at less than 12 hours (longer if you go for all the time stops and bad decisions), but I guess that would be plenty of story when 20+ hour long VNs aren’t the norm for you. As far as handheld sci-fi adventure games go, the Zero Escape series is definitely of higher caliber. I found Ghost Trick to be more exciting and fun as well, despite it not being very heavy on the sci-fi. I guess I’d put it on around the same level as Time Hollow with a higher budget and less interesting gameplay. It’s decent, but not that intense or mindblowing. Did keep me interested for a day or two, but not something I’d have on my mind after I’m done. It has the feel of a J-drama more than an anime.

Once you beat the main story, a mini game unlocks where you interact with a certain female character through phone conversation events. I didn’t care enough to bother digging further into it.