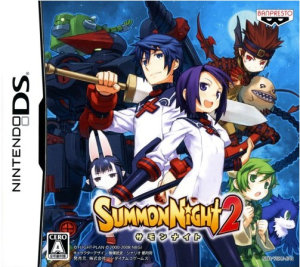 Don’t be fooled. The character designs look no where as good as the cover.

Trying to tackle my backlog of impulsively purchased games, easier said than done. Sometimes I have no idea what I’m thinking when I impulsively purchase stuff (something that I should really stop doing. The impulsively purchasing part, not the thinking part.), because I realized that I probably wouldn’t have gone on with it if I gave a good night’s rest and composed thought. Alright, so most of the time when I decide to import a game, I go though a careful thought process because imports are expensive, and I usually end up getting something that I enjoy. Then I found that some import sellers on the Amazon Marketplace give pretty nice deals for imports, and all reason flies out the window.

So uhh, Summon Night 2. It’s my first foray into the Summon Night series (minus Twin Age, which had a real-time battles system that turned me off), and I’m wondering whether starting with the second game is such a good idea after all. I’m on chapter 11 out of a total of 25 chapters, and it’s finally starting to interest me somewhat. For a supposedly character-focused game (because the story is nothing short of yawn-inducing), the characters are sure lacking in both dimensions and the entertainment factor. I find it hard to care about anyone other than my summoned mech partner from Loreilal (the machinery world), and that’s only because I named it Muramasa. Everyone else is pretty one-dimensional without many fun quirks to balance things out. I guess I do sort of like Nesty, the protagonist’s serious and by-the-book partner who doesn’t hold back from getting mad at the reckless hero, and Lenard because he seems to be a guy summoned from our “real world” into the world the game takes place in. The problem with the game is that it likes to introduce new characters left and right, and not dedicating enough time for me to care about them.

The game lacks a cool sword lady or a sharp-tongued sarcastic kuudere loli, so I can’t even rely on girls I find moe to be my driving force. Ameru is as typical and dull as a main girl can get, with nothing as of yet to subvert it. Girl with special powers who is wanted by some evil soldiers? Main character decides to stop what he’s doing to protect her despite meeting her several hours ago? I usually try to ignore obvious cliches in hopes that they at least have good execution, but it doesn’t even feel like they’re trying to have a good execution here. There’s also a girl with amnesia, who isn’t all that interesting either. The other girls aren’t exactly interesting either, and neither are the guys. I want to have a nice bromance, but the game isn’t even giving me much of that. The character design comes in that deformed styles from the 2000’s, so needless to say, that don’t look very attractive. Okay, so some of the girls look pretty cute, but the dudes don’t.

The gameplay is standard SRPG fare, with the exception of the summon system and the experience distribution. You can make contracts with summon beasts from other worlds, and equip them to use their magic. Some beasts can be summoned as a usable unit onto the battle field. It’s pretty cool because I like filling up my summon list. Too bad that as soon as I get into it, the chapter I’m in decides to not let me access the summoning grounds. The experience distribution is something I really like. Probably the only aspect of the battle system that other games should consider using. Each individual unit doesn’t gain experience from actions or enemy kills. Instead, you gain a whole lot of experience at the end of battle, and can select how you distribute it amongst battle participants. That way, you can level your main part evenly. Experience can be saved up and distributed at a later point, so leveling under-leveled characters that you don’t often use is also rather convenient. Otherwise, the game is just a slow SRPG that feels more tedious than fun.

I think I’ll play the game some more before deciding whether to drop. It’s not terrible, but it’s like something that I would play during a dry period, not when I have Soul Hackers staring at me from the shelf.