Behind the horrendous system and 90’s art that take a while to get used to is an interesting mystery and fun characters. It almost feels like an Ace Attorney game with only the investigation parts, two protagonists, and more risque situations. 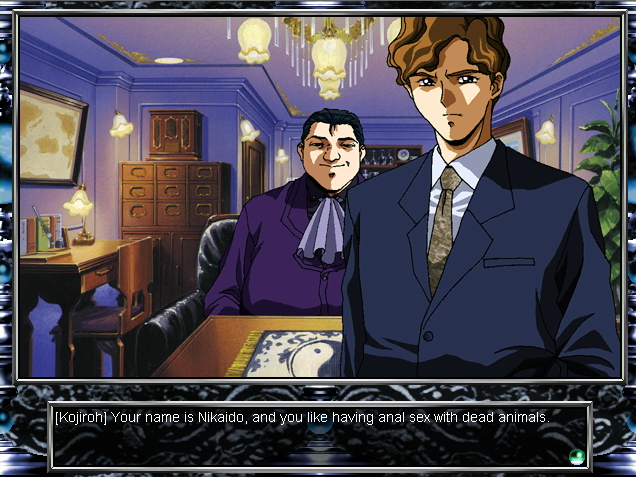 The story isn’t particularly deep, but the mystery kept me interested throughout. It has a little bit of various things: murder mystery, politics, romance, ecchi (no h-scenes in English release). Kojiroh is an entertaining protagonist, as well as Marina. I say it feels like Ace Attorney because there’s a lot of silly options and dialogue, a point & click-ish investigation gameplay, and a story that begins with a small case but ends on a big one. Most of the plot points didn’t surprise me (I would have been more surprised if I played this as one of my earliest mystery VNs, but its age certainly shows), except for the ending which felt too fast and requires a rather stretched suspension of disbelief because it threw in some sci-fi when the rest of the game had a decidedly normal “modern” 90’s setting. Nevertheless it was a fun experience with more 90’s style characters.

Switching between Kojiroh’s and Marina’s scenarios is key to the game, and provides a unique dual-protagonist experience. The protagonists are great, to the point that I’m considering digging into some of the sequels to see more of the character interactions. Marina is one cool gal, and not a female protagonist you’d see every day. I came for the mystery, stayed for the characters. Some of the dialogue had me really laughing, especially when Kojiroh was mocking Nikaido.

There aren’t really “heroines” since there are no routes, but Kojiroh does find himself surrounded by a bunch of beautiful women who have some kind of affection for him developed in several days. R-18 things happen, of course. The game seems to lean towards Yayoi for Kojiroh’s true love interest, although it doesn’t seem entirely sure whether it wants them back together or not. Meanwhile Marina is stuck in a romance that is the awkwardest kind of awkward.

Anyway, I’m now trying to find some of the sequels, like Eve The Fatal Attraction and Eve New Generation X. I don’t expect sequels to be as good as the original, but hopefully they’re at least a 6.5-7 if Burst error is 8+.

16 thoughts on “EVE Burst Error is not bad at all”