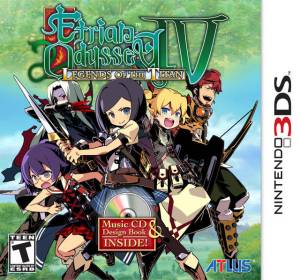 Around 60 hours later, I think I’m a little burnt out on first-person dungeon crawlers. Despite not being new to the Etrian Odyssey series, this is the first one where I went and beat the final boss. I haven’t even touch any post-game content yet, but I need a change in genre for now. I like the Etrian Odyssey games and their complex dungeons, mapping mechanics, and party creation, but I always burn out before the end, and earnestly look forward to the next one when it gets released. Good boys and girls shouldn’t pick up my backlog-growing habits.

EOIV plays similarly to the other EO games. First person view when traversing the dungeons and battling, editable map on the bottom screen. You create a party of explorers, and make your way through dungeons and beat their bosses. The classes this time are pretty normal, unlike the third game’s. Dungeons are also shorter at 3 floors each, but in return, you have smaller one-floor side dungeons to explore and level grind in. There is also a world map, which is basically an expanded version of EOIII’s sea travelling. You have to manually search the world map for dungeons, while avoiding FOEs and picking up food. It’s funny how while most games are getting rid of world maps in favor of point & click or interconnected hallways, the Etrian Odyssey series has gained one despite being a pure dungeon crawler that didn’t have one before.

Difficulty-wise, EOIV is probably the easiest one. Not only does it have shorter dungeons, it is also more forgiving and doesn’t murder you in the tutorial map. A lot of the dungeon FOEs can be defeated when you first encounter them, instead of murdering your ass until you come back a stratum or two later. Passive skills are actually useful, and resetting your skill point distribution is cheap at the cost of 2 levels (also resets your subclass). Even if you royally screw up your build, it’s okay because you can easily reset. Compared to the third game’s 5-level reset, this game gives you much more flexibility and room for error. Plus, when you unlock a new class, you’ll get some scrolls that will automatically level a low-level character to the proper level you are estimated to be at at that time or slightly lower. That way, you don’t have to level up a new character from level 1 to play with the new class. When you unlock Arcanists, you get scrolls that level a character to 25. The unlocking of the next two classes give you scrolls to level to 35 and 45 respectively. Replacing a party member no longer requires a shitload of work, if you find your party lacking.

For those who want to breeze through the game, there is a casual mode which renders death pointless because you’ll just get taken back to town instead of the Game Over screen, and you take less damage while also dealing more damage to enemies. You can toggle between Casual and Normal when in town. I know several hardcore masochists are probably raging against the addition of a casual mode and the less soul-crushing difficulty overall, since they don’t want their beloved niche game to cater more to normals. I don’t have a personal attachment to the series like some people, so I can’t say I’m not interested in how they handle the new spin-off game and future titles. Although, with the amount of people who think that adding a predetermined party and a stronger focus on story to the next game is totally unnecessary, I hope some of them understand why I’m not too thrilled about the addition of a male protagonist in the next Atelier.