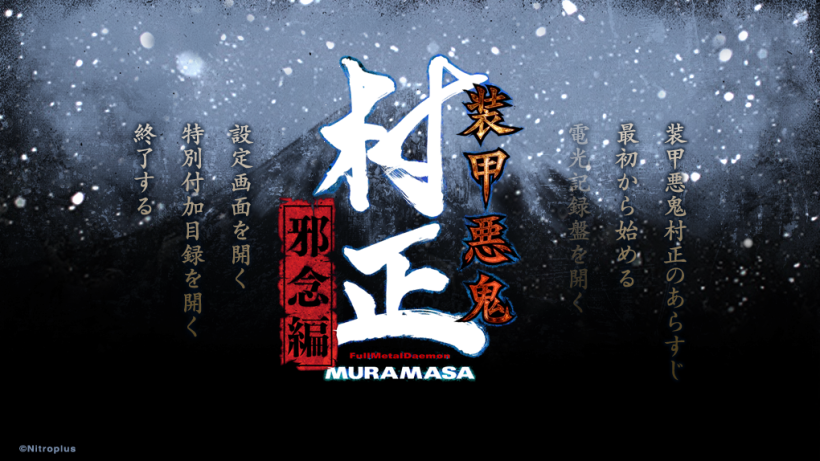 Thanks to not having internet for a while, I went and played the Muramasa fandisk. Considering the overall tone and how most of the routes end off, Muramasa isn’t exactly fandisk material. At least not the type of fandisk where you get after stories full of icharabu and eroscenes with the heroines. Okay, well there are a few eroscenes here and there, but Nitroplus being Nitroplus and Muramasa being Muramasa, they’re not exactly there for you to fap to. Even then, most of the main heroines aren’t the ones who get a chance at ero. Janen hen is basically an anthology disc of sorts, consisting of three main stories.

First, there is a short story about Kanae that takes place before the events of Muramasa. It’s about her being sent by GHQ to inspect a small village where people are dying off and the villagers have a very sour relationship with their magistrate, who was sent by Rokubara. It’s not that long, and as much as I like Kanae, both branches of the scenario ended off in a pretty anti-climatic manner. It doesn’t add much to the central plot either, although the situation presented is interesting enough.

Next there is a crack scenario with the cast of Muramasa trying to make the eroge into a movie. A terrible movie that butchers the plot of the true route and suffers from other general movie failures, amongst other things (like making Nitta Yuuhi the protagonist because Kageaki is too old to sell to a mass audience and his signature “smile” isn’t marketable). It’s hilarious, and pokes fun at various elements of Muramasa and how unmarketable it is. I liked the comedic aspects of Muramasa a lot, as well as its characters, so this scenario was fun.

Finally, what I found to be the most important part of the fandisk, is Re:Blade Art. It’s hard to explain what it is without spoiling it, so just look at it as a story that takes place after the true route of Muramasa, told from multiple characters’ points of view. It recaps, as well as continues parts where the true route left off. Easily the story I was looking forward to the most, but could have benefited from being longer than it is and expanding more on Oliga. I really want to know more about her, but nobody seems to want to tell me more.

Aside from the above three stories, there is also a collection of side materials, such as voiced versions of the gag webcomics (got a good laugh out of them), 3D animated shorts featuring the Tsurugi, and some wallpapers and staff commentary. So overall, it was a fun fandisk, but too short. The stories here also aren’t written by the main scenario writer. The main heroines don’t get a lot of screentime as well, with the exception of Kanae who had her own story. It would have been nice if Ichijou had a side story as well.