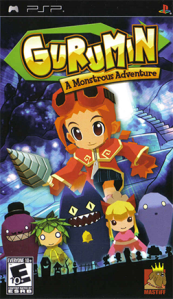 Immediately after I gush over an eroge, I type up a review about a kid’s action game. I am adept at keeping things consistent on this blog, clearly.

Gurumin is a standalone action/adventure game by Falcom, the creators of Ys and Legend of Heroes. It was originally released for the PC, and later got ported to the PSP. The player takes control of a young girl named Parin, who just moved in to a mining town to live with her grandpa while her parents go off exploring ruins. Said town is small and has no other kids, so Parin can’t even make friends. That is, until she encounters monsters that only children can see, and is brought to the monster world through an opening behind a wall. She manages to pull out and gain ownership of a legendary drill, and is tasked with saving the monsters from the phantoms who invade their town.

Gameplay:
This is 3D action game with platforming elements. Frankly speaking, the platforming elements are quite annoying and the camera feels clumsy. I largely prefer Ys’ or Nayuta no Kiseki’s top-down angle, which also makes the platforming smoother due to the ease of judging distance. The controls are clunkier than Falcom’s recent action RPGs, and the combat feels slower as well. But Gurumin has plenty of fun points.

Parin attacks with a drill. It’s slower than the usual sword, and feels somewhat more like the two-handed sword in Nayuta. In exchange for the loss of speed though, Parin gets a bunch of special moves and access to three different elements. The drill has three levels on the power bar, which increases as Parin attacks and decreases as she takes damage. At higher levels, Parin can utilize ranged attacks and spinning attacks, both of which are incredibly useful against mobs of enemies. She can also use charge attacks by holding and releasing X, which can break enemy equipment and various objects in the environment.

Parin doesn’t level up like in an RPG, but she does get access to a variety of headgear that provide different effects, all of which could be upgraded using junk, which is found in the dungeons. She also gets access to some healing items, and after each boss fight, she receives a Life Gem that increases her maximum HP.

The world map is easy to navigate, and each dungeon is divided into sections that act as stages. For each stage you are timed and evaluated depending on the amount of enemies your killed and pots broken (do you want to break pots like Link and get rewarded for it?). To clear a stage, you simply need to make it to the end and collect a piece of furniture, which you can return to the townsmen (er, townsmonsters?) and use to unlock more stages. The dungeons, in additional to some platforming elements, also hold many puzzles. They’re not too hard, usually of the box-pushing variety. Dungeons also sometimes have walls that can be drilled into, ice floors that can be melted using the fire drill, and other different terrains that can hinder your progress. It’s all good though, there’s nothing that can be considered truly frustrating, at least on normal mode. Higher difficulties must be unlocked through clearing the game.

Boss fights are rather easy, compared to Ys games (normal mode). You can easily win on your first try, if you can quickly figure out what you’re supposed to do.

Story/Characters:
Since Gurumin is a short game, the plot is very simple and straight to the point. It’s cute with the monsters and stuff, but it’s by no means a game you play for the story. The monsters are quirky, but mostly exist as an excuse for Parin to explore more dungeons. Parin herself makes an appealing protagonist. A snarky red-headed little girl who wields a drill is always welcome in my book. Heck, she could be Adol Christin’s descendant or something! Red hair, some crazy fighting skills for a kid, and going to a completely different world to make friends? Plus the fact that her parents are off exploring. Adventure probably runs in the family.

Visuals/Music:
Yeah! Falcom music! I wasn’t that fond of the music initially, but the good tracks kick in later on. The 3D graphics look pretty dated since this is a PSP port of a 2004 game from a company that wasn’t exactly known for cutting-edge graphics at that time. The aesthetics style is of the cutesy super-deformed kind, which fits very well with the general atmosphere and setting. The environments aren’t anything impressive either.

Overall:
Gurumin is a fun action/adventure game from Falcom that lacks the polish of their latter games. Movement doesn’t feel as smooth as Ys games or Nayuta no Kiseki, but controlling the drill-wielding Parin is fun due to the variety of attacks you can use. I love the spinning attacks. First playthrough took me around 13 hours, so it’s not very long and worth a play if you’re trying to scratch a certain itch or just want to break things and hit enemies. You get rewarded in more ways than one for breaking pots, and once you start breaking the pots, you’ll want to drill down other things in the vicinity as well. Sooner or later, you’ll find yourself taking the time to run your drill through trees and columns for a few coins.