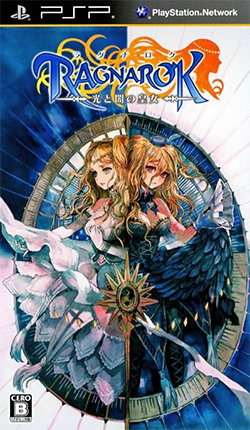 The PSP is almost dead in the North American market, and the release schedule has slowed to a small trickle of RPGs as life support. One such game is Ragnarok Tactics, a Strategy RPG developed by GungHo Online Entertainment and localized by Aksys. It is based off of the popular MMO Ragnarok Online, but aside from using the same classes and currency, I’m not sure how much of it is actually related to RO. It works fine as a standalone game, and everything is generic enough that if you change some names around, it would just be an average SRPG that slapped on the Ragnarok name to sell better.

Regardless, something about this game drove me to 100% it.

You are out on a monster hunt with your master Toren under a neutrally aligned militia, and the two of you befriend Cynthia from the Branshaldo Empire and Yuri from the Aura Republic, two nations with tense relationships due to previously being at war. The four of you join forces to hunt down the monster, and go your separate ways afterwards, promising to remain friends. The rest of the world doesn’t want to be friends though, so when Branshaldo’s current king dies, the Aura Republic decides that it’s a good time to invade their neighbour and thus, war between the two break out once again. You are given the option to join Cynthia in the Branshaldo Army, help out Yuri’s Aurian forces, or stay with Toren to pursue a strange evil clown.

Each chapter you will be given a choice of 3 or 4 battles to participate in, and you must choose one. There are branching endings for each alignment, as well as a True end and a Dark end, obtainable in that order. Unfortunately, the branch happens at the end, and the individual routes are very brief, and the same events happen regardless of what you do for the first 3 routes, so you are technically just choosing whose side you want to see rather than making choices that have effect on the plot. Speaking of which, the story itself is short, even for something intended to be played through multiple times. The climatic events and endings are really underwhelming, and the True ending is rushed as well. The game reveals a bunch of plot points towards the end, like it’s setting up for a more epic and fantastical second half, but then decides “nope, this is it for you, here’s the final boss.”

Combat is typical tactical RPG fare, where characters move on a grid and turns are determined by speed. Unique to Ragnarok Tactics is Burst Strike, which allows the current unit to perform a team attack with up to two more unites on nearby enemies. This is a good way to do more damage and level up weak characters, since experience is also evenly distributed amongst participants. You can create generics of different classes, and get customization options like stat point distribution after levelling up and skill points to strengthen skills (1 point every 3 job levels). Each unit has a separate base and job level, and skills are dependent on the latter.

The key thing about Ragnarok Tactics’ gameplay is that it is highly unbalanced and very easily broken. There are a few worthwhile, game-breaking classes, and the rest can go pretty much unused. Having multiple Snipers and two healers will effectively massacre each map early-game, and whatever melee classes (with the exception of Champions) or High Wizards will lag behind without getting any kills. Ranged physical classes are generally the most useful, since both their attack and speed come from the same stat. Sniper happens to be the only one available initially. In late game, Champions get a skill so broken that if you have 3 of them, you can wipe each map in a matter of seconds. You can easily forego strategy in this SRPG.

The difficulty in general is quite low, so SRPG veterans will find the challenge unsatisfactory. Even before getting to the point where every map is a joke due to Champions, the enemy AI is the kind that will stand there like an idiot until one of your units are in their attacking range. They don’t even try to buff themselves or anything. On the bright side, since the game is easy and very breakable, it becomes rather relaxing and easy to 100%. Battle speed can also be quite slow, with some battles 30-60 min depending on your strategy. Of course, it’s not very jarring to those who have played many SRPGs as this is not exactly a genre known for its quick pace.

Graphics are kind of a mixed bag. The character designs, backgrounds, and battle maps are beautifully illustrated, but the 3D character models during gameplay look terrible like badly-aged early 3D games. With that the PSP is capable of, the 3D models could have looked much nicer. Or, they could have made animated 2D sprites, considering how the battle is typical isometric SRPG style and you wouldn’t need 360 degree rotation. Heck, why are the characters in 3D during battles, when absolutely everything else is nicely illustrated in 2D?

Music is pretty nice, especially some of the battle themes. I’ve got no complaints here. The sub-events are also a lot more entertaining than the main story. Not only does your silent MC have more presence in those, but most of the sub-events have more hilarious dialogue than the bland stuff that comes up in the main plot. Another thing that I don’t have any particular complaints about.

In the end, I enjoyed Ragnarok Tactics since I haven’t played an SRPG in a while and was kind of itching for one, but it’s not particularly great or anything. It’s not a must-play, but if you happen to like SRPGs and have a certain hunger for one right now, it may be enjoyable. Just don’t expect anything impressive. If you don’t like SRPGs, this game is going to do everything but change your mind.

One thought on “Review: Ragnarok Tactics”