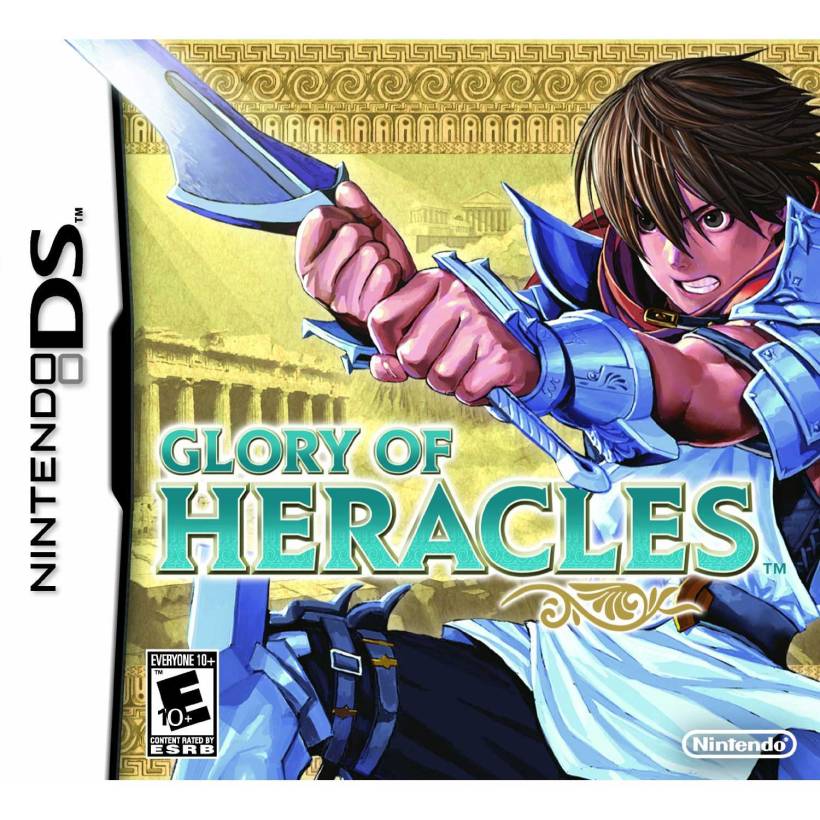 This review (as well as the previous one) was supposed to be out much earlier this month, but hey, I’ve been engrossed by Pokemon Black 2 since it came out, and Tales of Destiny before that. I quit this game back in the summer, after playing for around 14 hours. Unlike some games that haunt me with the possibility of being good after I quit, Glory of Heracles was something I almost completely forgot about after dropping. If I bought the game at launch for $35, I would probably have forced myself to finish it and then rant about it online. I did get it for $5 new, so instead of feeling ripped-off, I simply got bored and forgot about it.

Glory of Heracles is about you, silent nameable MC, who is supposedly Heracles but has amnesia. You meet Leucos, a girl pretending to be a dude but obviously not succeeding at it, who is an immortal human. You two decide to head to Mt. Olympus to seek answers, and team up with other immortals along the way, and get caught up in several events on the way there. I’m pretty sure there is going to be some kind of plot twist after the party reaches Olympus, but I never got that far so I cannot say for sure. The plot up to where I played had been dull, a by-the-book journey with an ancient Greek theme. At least the writers sounded like they had fun, because the dialogue is hilarious at times, and likes to poke fun at itself.

I’m not that against silent protagonists since there had been instances where they were done well, but that is not the case with this game. Not only does the protagonist never speak, he also has no presence half the time and feels like a wall rather than a person. Most games with silent protagonists will acknowledge you and speak to you as if you are important, and makes your MC seem like he is significant even if he does not talk. In Glory of Heracles, the party likes to talk amongst themselves while you stand aside and say jack shit, and the yes/no questions they ask you seem more like an afterthought. The one who leads the party, says important dialogue, and makes major decisions is Leucos, and the MC basically stands there like a brick. Suikoden, Persona 3, and even Ys games made you seem like the leader or at least important to what is going on, but you just feel like a silent tag-along here. If the silent protagonist is for the sake of immersion here, then I’m definitely not feeling it.

The gameplay is bearable at best. Battles are very easy, and bosses are not much harder. There is no sense of satisfaction gain from defeating them. It’s a pretty standard turn-based system with front/back rows and magic, and the only unique gimmick is the use of touchscreen minigames to power up your spells up to 170%. You can also overkill enemies to replenish MP (or, in the case of undead enemies, prevent them from reviving). It was okay in my book–something so typical it was impossible to induce rage. Dungeons are very simple, and whatever puzzles that stand in your way will take a matter of seconds to figure out (mostly the “pull this lever to open the door that was blocking you” sort). The progression is also very linear, even compared to most story-focused RPGs. You cannot return to previous towns (nor do you have a reason to), and there seem to be no sidequests or anything. All you literally do is go to the next town, proceed straight to the next dungeon, return to town, set off for next town, repeat. Even some of the most story-centric RPGs I’ve played had detours to take and side events for you to see before progressing the plot, but you have no reason to go anywhere the plot doe not demand in Glory of Heracles. The few games I’ve played that are this linear had better gameplay and/or plot to compensate.

While the music was decent and sounded nostalgic at times, the visuals were pretty unattractive even for the DS. The environments were pale in color and dull in design. Even the Pokemon dungeons, which consist of many repeatedly reused objects and 2D textures, feel more lively than this. Heck, most 2D DS games look much more vibrant and pleasing. The character sprites are small and blurry, and this is coming from someone who is accustomed to games that use pixelated SD sprites.

Overall, there is not much of a reason to play Glory of Heracles. You have a massive world of games ahead of you before you feel bored enough for this game. While the ancient Greek setting was kind of cool and the dialogue got awesome at times, the other elements were so unremarkable I had to drop the game because it failed to grab my interest after 14 hours. That’s quite a feat, for me to drop a game not out of rage or dislike at the system, but for being simply uninteresting in all areas. It doesn’t do any particular thing wrong, but when all aspects of it add up to mediocrity, I cannot recommend it.

2 thoughts on “Review: Glory of Heracles”